In Berlin, a new push for lasting peace in Libya 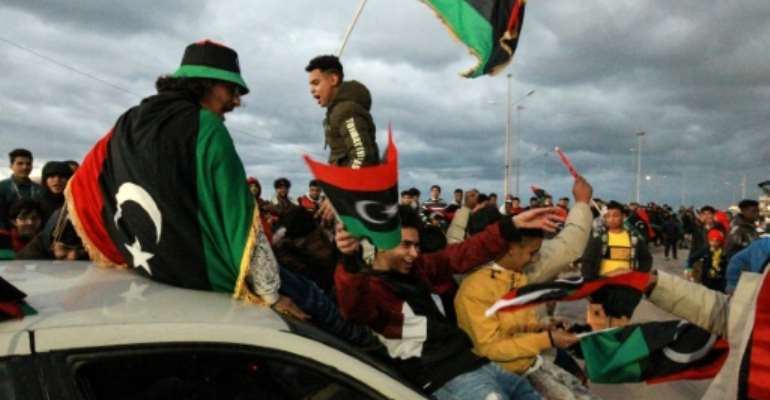 Libyans marked a decade since the 2011 revolution in February. By Abdullah DOMA (AFP/File)

Germany will seek to broker lasting peace in Libya on Wednesday, gathering world powers in Berlin to extract a firm promise to withdraw foreign fighters and keep the North African country on track for its December 24 election.

The efforts to end a decade-long spiral of violence in Libya would bring the country's transitional government, as well as US Secretary of State Antony Blinken, to Berlin for the in-person UN-sponsored talks.

Like host German Foreign Minister Heiko Maas, Blinken and Mangoush harked back to last year's meeting and the pledges made but which have not been fully implemented.

The presidents of Russia, Turkey and France had then vowed to end foreign meddling in Libya and withdraw foreign militants or troops.

Since those talks, a formal truce was agreed last October that led to the creation of a transitional government under Prime Minister Abdul Hamid Dbeibah and a presidential council headed by Mohammad Younes Menfi which have promised to hold polls.

However, the UN has warned that progress has stalled, notably on a key requisite of the polls -- the pullout of all foreign soldiers.

But the presence of an estimated 20,000 foreign fighters and mercenaries on Libya's territory is seen as a threat to the UN-backed transition leading to the elections.

Diplomats underlined the delicate balancing act needed to ensure that neither side feels it is losing out by withdrawing.

Jalel Harchaoui, Global Initiative senior fellow and an expert on Libya, said Wednesday's talks must go beyond a simple declaration of intent if they are to make a real impact.

"Is there a mechanism for (the fighters) to leave? Are Libyans pushing for them to leave in real life on the ground? No," he said.

But he voiced hope that the talks would bring tangible help on the upcoming elections.