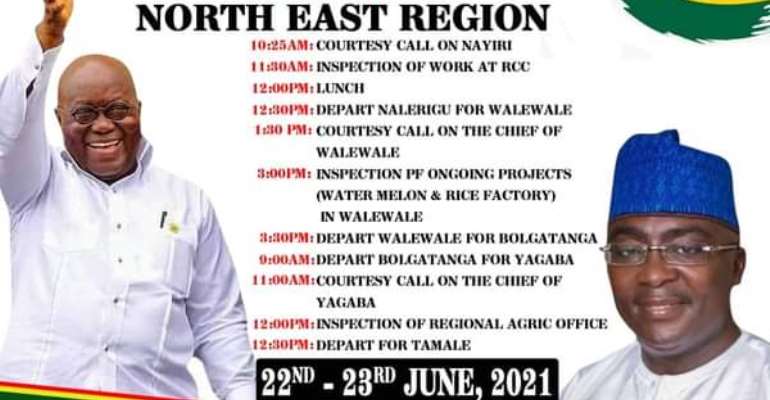 President Nana Akufo-Addo is about to do something really usual in his regional tour.

For the first time, the President and his Vice, Dr Mahamudu Bawumia, are embarking on his regional tour.

Never before has Mr Akufo-Addo nor any President of Ghana for that matter embarked on a regional tour with a Vice President.

From 22nd to 23rd June, Mr Akufo-Addo and Bawumia are to tour the North East Region.

Reliable sources say the President is aiming to use such regional tours to campaign for Bawumia to be elected as Presidential candidate of the New Patriotic Party (NPP) for 2024.

Sources say Dr Bawumia’s popularity has grossly faded, especially after he recently sought to unduly use the funeral of the late Sir John to run a campaign.

According to sources, the President is highly likely to appeal to chiefs in the North East Region to get their people to vote for Bawumia.

In the North East where Bawumia hails, they are to visit the Nayiri.

They are also to call on the chief of Walewale. Walewale is Bawumia’s hometown.

Sources say it is becoming increasingly clear that Bawumia cannot win the NPP flagbearer race but the President is desperately trying to do everything possible to ensure that he wins.

According to sources, the President may take Bawumia on other regional tours that he (Akufo-Addo) is supposed to attend alone.

Both of them are to abandon Jubilee House, the seat of Government to campaign for Bawumia.

Interestingly, the President is going to campaign for his Vice at a time some of his appointees with Presidential ambitions are barred from campaigning.

The leadership is also seeking to bar other Presidential aspirants from campaigning.