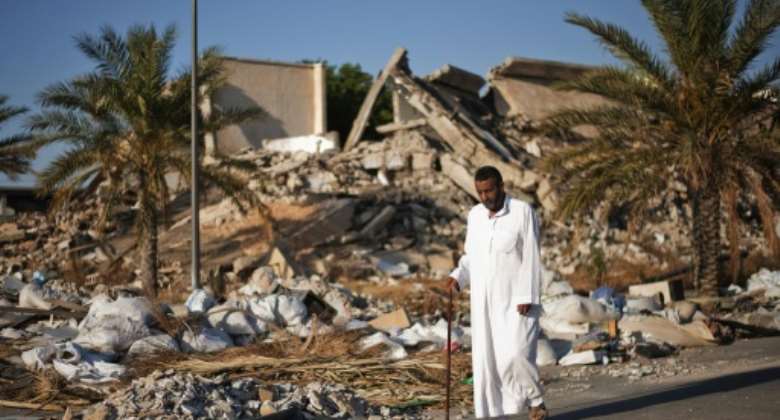 A man walks past a destroyed building at Libyan dictator Moamer Kadhafi's former headquarters in Tripoli in a picture taken in 2012, one year after the ruler was ousted and killed in a NATO-backed uprising. By GIANLUIGI GUERCIA (AFP/File)

Before Moamer Kadhafi's ouster, Libyans steered well clear of the Bab al-Aziziya compound from where the dictator ruled, but a housing shortage in Tripoli has forced squatters to move in.

Satellite dishes and water tanks now fill the grounds of the once feared fortified complex in a southern suburb of the capital, as young boys kick balls and cars drive in and out of the main gate.

Much of the sprawling compound was destroyed in NATO bombardments during the 2011 uprising against Kadhafi and then rebels went on the rampage, ransacking it.

Now dozens of families have moved into the small houses once allocated to soldiers and the villas that were home to high-ranking army officers.

Bashir, 68, has been squatting in a 400-square-metre (4,300-square-foot) villa since 2012, one year after Kadhafi was captured and killed by rebels in Sirte, the coastal Mediterranean city that was his hometown.

"Hundreds of Libyans have come to live here," he said, puffing on a cigarette.

"The villa had been set ablaze and it took me a year to renovate it, at great expense," said Bashir. "But I'm not complaining."

The complex, complete with bunker and a warren of underground tunnels, was Kadhafi's home and the site from where he ruled Libya for four decades.

Built in the 1980s, it was reinforced following a US air strike in 1986 in response to an attack on US servicemen at a Berlin nightclub, for which Washington held Tripoli responsible.

'I will not leave'

In its heyday, Bab al-Aziziya, which covers six square kilometres (two square miles), housed a zoo, an indoor pool, countless murals and a fairground in its gardens.

An acute housing shortage in Tripoli has forced many Libyan families to squat in the once-feared Bab al-Aziziya compound where Kadhafi lived and ruled during his 40-year dictatorship. By JOSEPH EID (AFP/File)

Kadhafi had expanded the grounds by knocking down adjacent neighbourhoods.

After the uprising, Libyan authorities considered turning Bab al-Aziziya into a "green zone", an amusement park or a memorial for the "martyrs" who had fallen in the conflict to oust Kadhafi.

None of those projects has materialised.

But according to information obtained by AFP, authorities are planning to turn Bab al-Aziziya into a park as part of a wider campaign to beautify Tripoli.

If so, the new residents of the once feared Kadhafi headquarters could face eviction.

"I will not leave my house," said a man who gave his name as Hassan, declining to reveal his true identity for security reasons.

His squat "was in an appalling state, there were no doors or windows", said Hassan, who claims to have spent the equivalent of $32,100 on repairs.

Ten years since the uprising that toppled Kadhafi's regime, many Libyans who used to receive government grants and subsidies are struggling to make ends meet.

The oil-rich country descended into chaos after the dictator's fall and still faces a host of political and economic crises, including chronic power cuts, petrol shortages and derelict infrastructure.

A Libyan rebel fighter celebrates the seizure of Bab al-Aziziya in August 2011 after NATO bombardment destroyed much of the sprawling compound. By PATRICK BAZ (AFP/File)

Years of conflict in post-Kadhafi Libya have resulted in tens of thousands of people being displaced, with many seeking refuge in big cities like Tripoli, creating a housing shortage.

"Before the revolution, you could find houses and there were less people (in Tripoli). But now finding an affordable house is rare, prices have skyrocketed," said Bashir.

The minimum monthly salary ranges between 450 and 600 Libyan dinars ($90 and $120), civil servants often go months without pay, and bank loans are almost impossible to obtain.

"Population growth and the displacement of Libyans due to conflict, with many people moving to big cities, means that finding decent housing is hard," he said.

"And rents have doubled in the past 10 years," said Tripoli-based real estate agent Ali Kelfat.