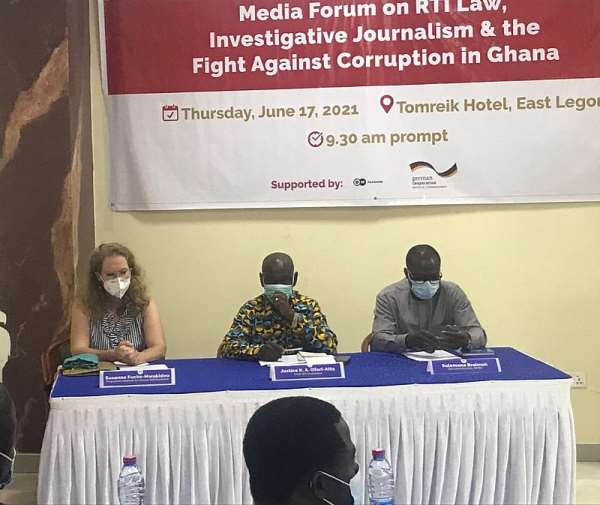 The Media Foundation for West Africa (MFWA) on Thursday, June 17, 2021, launched a Right to Information (RTI) Guidebook to help the public particularly journalists on effective paths to secure needed information.

The RTI Law was passed on March 26, 2019, by the Parliament of Ghana after decades of delay. Subsequently, President Akufo-Addo on May 21, 2019, gave his assent to the it before it became effective in January 2020.

Although the law has been operational since last year, a survey conducted by MFWA has revealed that it is being underutilised, especially by journalists.

In an effort to contribute to public sensitization and access to information under Ghana’s Right to Information Act (989), the MFWA has come up with a Guide Book titled, 'Essentials of The RTI Law.'

It has been concisely produced by Lawyer and Media Practitioner Sampson Lardi Anyenini to serve as a toolkit to help journalists, citizens, and information holders understand the Act and how it operates.

Essentials of The RTI LAW is a five-chapter book containing practically all and everything in the Right to Information Act, 2019, (Act 989).

It presents an easy understanding of the law and its operations. It further mpowers the reader to use and assert the law to procure information to which access is guaranteed under the law.

Speaking at the launch, Sampson Lardi Anyenini bemoaned the lack of usage of the RTI Law while insisting that the media must endeavour to take advantage and aggressively access needed information.

According to him, although the process to access information with the RTI Law is not smooth sailing, no one should be discouraged from utilising the it for its intended purpose.

Handed the honour to declare the Guidebook officially launched, retired High Court Judge Justice K.A Ofori-Atta commended the MFWA for coming up with the guide.

He charged journalists to read the guide on a daily basis and thrive to be experts in seeking information one may need.

Taking his turn to speak at the launch, MFWA Executive Director Sulemana Braimah called on all stakeholders to offer the required support to ensure the RTI Law serves its relevance.

Mr. Braimah called on the RTI Commission to do a good job in helping the public and journalists to access information when it is called upon.

For Ms. Sussane Fuchs-Mwakideu from the DW Akademie who graced the launch as a special guest, the MFWA deserves praise for coming up with a Guidebook.

She noted that in the midst of the Coronavirus pandemic where information is key, the RTI Law and its effective use is important not only to journalists but to everybody.

“We at the German Academy we believe now more than ever to strengthen journalists and to equip them for quality journalism in a digital age and certainly the access to information is key,” Ms. Sussane Fuchs-Mwakideu noted.

The launch had officials from the RTI Commission present including its Executive Secretary Yaw Sarpong.

He pledged that his outfit will be open to everyone at all times to ensure the needed information is provided in accordance with the RTI Law.

Others present at the launch included award-winning investigative journalist Manasseh Azure, a number of anti-corruption agencies such as the Ghana Integrity Initiative (GII), led by its Executive Director Mrs. Linda Ofori-​Kwafo.