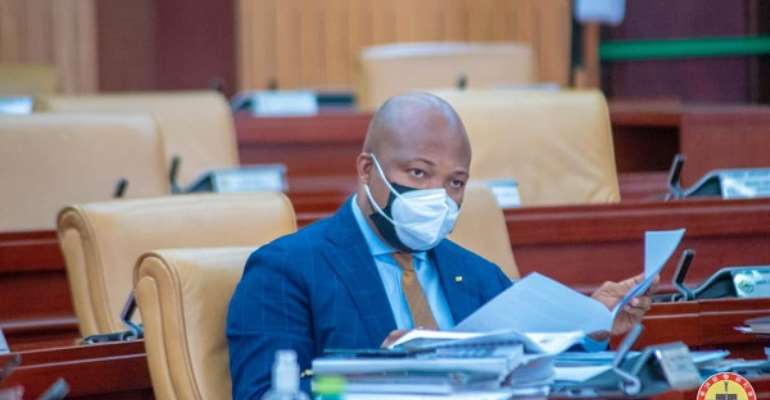 Member of Parliament for North Tongu, Samuel Okudzeto Ablakwa's urgent question on the cost of the President's travels to France, Belgium and South Africa is no more on the agenda of Parliament today, Thursday, June 17.

The Finance Minister, Ken Ofori-Atta was scheduled to answer the said question today after the Defence Minister, Dominic Nitiwul spoke on the airworthiness of the Presidential jet yesterday – Wednesday, 16th June 2021.

It's unclear why the question has been taken off the order paper while other questions to be answered by the Finance Minister still remains.

Meanwhile, the house is currently locked up in a closed-door session on the determination of the District Assemblies Common Fund.

The urgent question has generated controversy following an earlier publication by Samuel Okudzeto Ablakwa with regard to the cost incurred by the president when he chartered a supposed luxurious private jet.

The Minister was expected to answer the second leg of Ablakwa's question on the airworthiness of the presidential jet in Parliament today.

On the same issue, the Minister for Defence, Dominic Nitiwul , has justified why President Nana Addo Dankwa Akufo-Addo, didn't use the presidential jet for his recent trips.

According to Mr. Nitiwul, the ultimate factor in deciding the type of aircraft the president uses for his trips is “safety”.

He insisted that the challenges with the current presidential jet such as the limited passengers it can carry, the number of times required for refuelling on a trip, and luggage capacity among others, makes the aircraft not fit for purpose.

He concluded that no president can even take his shower on the aircraft when the need arises.

“This aircraft will carry a load of 11 persons minus the crew. When this aircraft is travelling to the eastern part of the USA or Asia, it will not load a crew of more than eight plus the luggage. So it depends on where it is going. Secondly, I have also said the aircraft has to do refuelling stops, and also in this COVID-19, when you are travelling to multiple destinations like the president's recent travel, the Falcon couldn't have been taken because he would have had to do technical stops which are not desirable, and when he is travelling with more than 20 people like he has been doing for business trips that brought huge sums of money for this country, he will need more than just a Falcon, otherwise, the others would have to go a day ahead before the president to prepare themselves.”

“In fact, the president would also have to go a day ahead because no president can shower in this aircraft. He cannot move from this aircraft straight into a meeting.”