France and Russia jockey for influence in Central African Republic 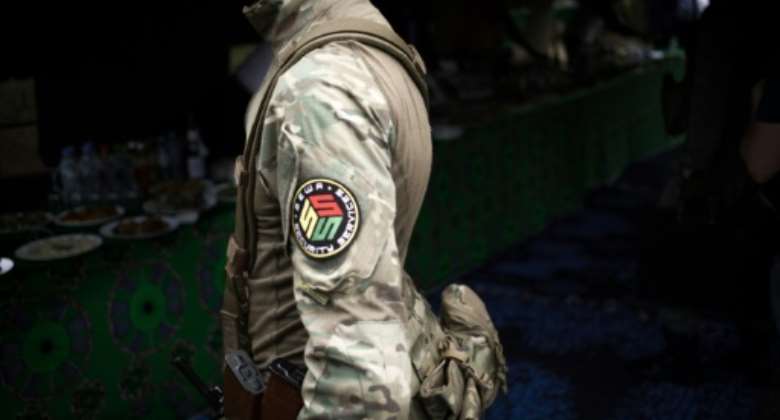 Russian paramilitaries have been present since 2018, but Moscow boosted the force by an estimated 300 at the end of December. By FLORENT VERGNES (AFP/File)

The Central African Republic, a poor country long riven by strife, is at the heart of tensions between Russia and France, which froze budgetary aid and military cooperation after its former colony developed close ties with Moscow.

Paris accuses the CAR of being "complicit" in an anti-French campaign orchestrated by the Kremlin, which since 2018 has deployed hundreds of paramilitaries, becoming a powerful influence in President Faustin Archange Touadera's regime.

Russian companies have also established a presence in the CAR's mining sector, notably in gold and diamonds, for which they obtain mining permits.

Thanks mainly to Russian forces, the government in Bangui has since January taken pride in recapturing much of the vast territory controlled by rival armed groups since a civil war broke out in 2013.

Moscow officially recognises the presence of 1,135 "unarmed instructors" duly declared to the UN, but refuses to comment on the place of paramilitaries from Russian security companies who form Touadera's close guard. By FLORENT VERGNES (AFP)

Some paramilitaries have been present since 2018, but Moscow boosted the force by an estimated 300 personnel at the end of December to shore up Touadera, who was threatened by a rebel offensive.

At the United Nations, France was the main sponsor of a strict arms embargo in 2013 and continues to defend it today. However, from 2019 to 2021, Russia succeeded in obtaining exemptions from the UN for the delivery of small arms.

Moscow officially recognises the presence of 1,135 "unarmed instructors" duly declared to the UN, but refuses to comment on the place of paramilitaries from Russian security companies who form Touadera's close guard and protect mineral deposits.

At the United Nations, France was the main sponsor of a strict arms embargo in 2013, but Russia has succeeded in obtaining some exemptions. By Camille Laffont (AFP)

A media campaign with anti-French overtones seeks "to show Russia's re-engagement in Africa as a reliable, pragmatic partner, based on a logic of non-reciprocity -- as opposed to a France which would impose a political quid pro quo for its assistance," said Maxime Audinet at the INSERM institute for strategic research in France.

In turn, France and a number of NGOs denounce the role played by hundreds of armed men linked to the private security group Wagner headed by businessman Yevgeny Prigozhin, who is reputedly close to Russian President Vladimir Putin.

In the eyes of the Bangui regime, France stands for the hated UN weapons embargo and raises allegations of "neocolonialism" -- even of perceived support in Paris for certain rebels.

Social networks and media close to the government repeatedly point out Russia's effectiveness.

Moscow, the message goes, has delivered weapons and made it possible to defeat armed groups.

But at the end of March, a group of UN experts raised concerns about alleged "serious human rights violations", "mass summary executions" and "torture" by Russian paramilitary forces.

"These are machines to loot and kill which serve the interests of the president and his external allies, in particular the Wagner group," John Prendergast, co-founder of the American NGO The Sentry, said Tuesday. The Sentry specialises in the hunt for "dirty money" financing wars.

Late May, shortly after France suspended aid to the CAR, French President Emmanuel Macron said "anti-French speech has made it possible to legitimise a presence of predatory Russian mercenaries at the head of the state."

Touadera "is today the hostage of the Wagner group," Macron said.

"We have to tell this country the truth," a French diplomatic source told AFP. "By suspending (our funds), we are sounding the alarm."

Tension heightened in early June when a Frenchman, Juan Remy Quignolot, arrested in Bangui a month earlier in possession of unlawful weapons, was accused of spying and conspiracy.

The Central African Republic is at the heart of tensions between Russia and France, which froze budgetary aid and military cooperation because of Moscow's engagement. By FLORENT VERGNES (AFP)

"We had the opportunity to get weapons with Russia and we took it.

"We want no more armed groups on the territory. France has to stop having a paternalistic attitude regarding our choice of allies."

On June 10, prime minister Firmin Ngrebada resigned, to be replaced by Henri Marie Dondra, whose profile is deemed more compatible with the French.

"Ngrebada was the Russians' man, the brains behind the link" with Moscow, Roland Marchal of the International Research Center (CERI) think tank in in Paris told AFP.

The change could mark a "first step in the restoration of trust", he said.