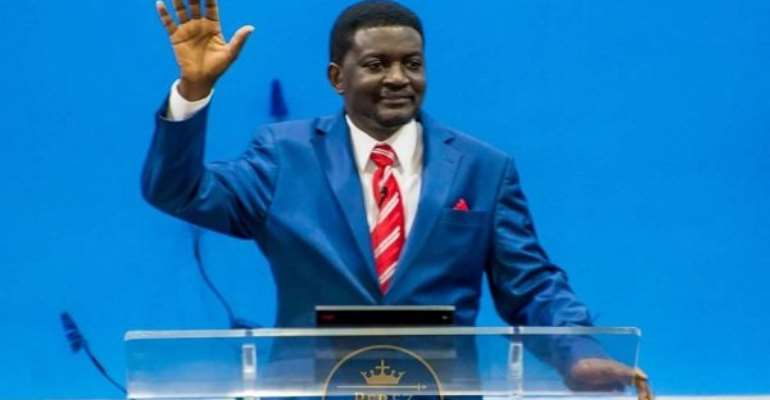 “I think that if there’s anybody we must support, we must support this Regional Minister, who wants to make Accra, our capital city, work again for the benefit of all of us”, the founder of Perez Chapel International told his congregation on Sunday, 13 June 2021 at the Perez Dome, Dzorwulu during his sermon.

“Why I’m praying for him is because in this country, when you’re doing the right thing, people envy you and undermine your efforts”, he explained, adding: “So, we are praying for him and his Regional Coordinating Council that he will succeed”.

“Hon. Quartey, more vim and don’t slack”, Bishop Agyinasare urged as he taught about leadership on the theme: ‘The Joseph Paradigm – Parallels Between Jesus & Joseph 2’.

He said “leaders must be determined to leave the nation better than they met it”, pointing out that he admires the Greater Accra Regional Minister “for his passion to transform Accra”.

Bishop Agyinasare said Mr Quartey “made a lot of sense when he said: ‘When Ghanaians travel to Singapore and other places, they don’t throw rubbish around because they obey the law. However, after two weeks when they return from the airport, they start littering. I want to enforce the laws laid down for the city’”.

“What made him my darling”, Bishop Agyinasare added, “is when he said: ‘We have set up a committee to come out with a blueprint for the city so that anyone who takes over from me can continue with what the city must be ‘The Make Accra Work Again Bible’. The works of that Salifu Amankwa, Hon. Agyiri Blankson, Hon Vanderpuye etc., that they did before must have continued.”

Since assuming office this year, Mr Quartey has undertaken a lot of decongestion exercises in several parts of Accra, as part of his efforts to ensure the national capital is rid of filth.

He recently led a demolition exercise on the Spintex Road where structures that had encroached the Kotoka International Airport’s buffer zone were razed.

His latest project is his determination to relocate onion sellers from the Agbogbloshie market to Adjin Kotoku.

Concerning that project, Mr Quartey recently told Accra-based NET 2 TV on a discussion about his ‘Let’s Make Accra Work’ campaign that: “Whether they like it or not, we will move them because we have made an alternative arrangement for them”.

“I have heard they have gone to some mallam to kill me. They are kidding”, he said.

“They should tell the mallam to return to his hometown because so far as God exists, nothing will happen to Henry Quartey by the grace of God, and by July 1, 2021, we shall move them”, he said.