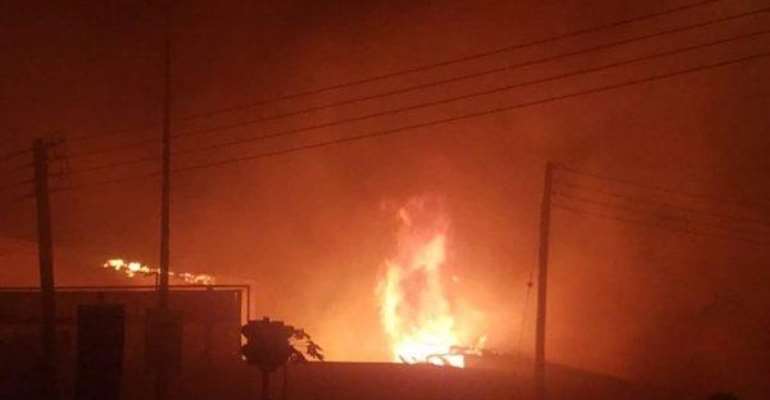 A 56-year-old man, Mr Samuel Kwadwo Fordjour has burnt to death in a fire outbreak at Asafo Dadiesoba in the Kumasi Metropolis of the Ashanti region.

The fire reportedly started from the bedroom of the deceased around 12:15am on Thursday, 17 June 2021, and spread to other rooms on the first floor of the storey building.

Though other people were in the house, they were able to run for their lives but the caretaker of the house who was trapped in his bedroom was burnt.

Uncle of the deceased, Philip Kwame Oppong told Kumasi FM's Elisha Adarkwah that they did their best to break into the room of the deceased to save him after they heard him screaming for help but could not due to the terrible nature of the inferno.

He said though they called the fire service early, they could not arrive at the scene on time.

In all, six out of 10 bedrooms on the first floor of the 230bedroom storey building and its contents, amounting to thousands of Ghana cedis were completely burnt while the rest were partially burnt.

The Public Relations Officer for the Regional Fire Service, DOIII Ackah Desmond told Elisha Adarkwah that firefighters from the Kyerepatre, Komfo Anokye, and Manhyia fire stations combated the fire after they received a distress call.

He said the fire was caused by an unattended electrical water heater that was left on and in the process, overheated and ignited the fire.

The charred body of the deceased has been conveyed by the police and deposited at the Komfo Anokye Teaching Hospital morgue for preservation.