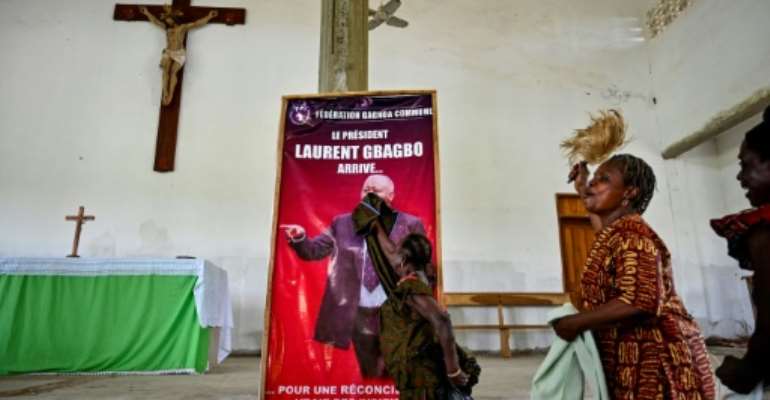 A woman dusts a poster reading 'President Laurent Gbagbo arrives for a true reconciliation of Ivorians' before a mass in his hometown of Mama. By SIA KAMBOU (AFP)

Former president Laurent Gbagbo returns to Ivory Coast on Thursday for the first time in nearly a decade, after he was cleared of crimes against humanity and his once-bitter rival welcomed him back in the name of reconciliation.

Gbagbo left the country in humiliation in 2011, after his refusal to accept defeat in an election sparked a conflict that ended in his arrest and dispatch to The Hague.

The 76-year-old's homecoming will be a key test of stability in Ivory Coast, the world's biggest cocoa producer and the wealthiest country in francophone West Africa.

Gbagbo is set to land in economic hub Abidjan at 1545 GMT aboard a commercial flight from Brussels, his home since the International Criminal Court (ICC) acquitted him in a shock decision in 2019. An appeal against the ruling failed in March, paving the way for his return.

He was ousted in April 2011 after around 3,000 people died in the months-long conflict that followed his refusal to accept electoral defeat at the hands of Alassane Ouattara, the current president.

Crowds to cheer him on

Today, Gbagbo has been recast in the role of statesman, called upon to help national reconciliation after elections last year left scores dead.

Ouattara is letting Gbagbo use the presidential salon at Abidjan airport upon arrival, and tents will be set up for dozens of notables to hail his return.

A profile of Laurent Gbagbo. By Camille CAMDESSUS (AFP/File)

He will then travel through the city to the Attoban neighbourhood, where his old 2010 campaign headquarters are located, according to a statement from his Ivorian Popular Front (FPI) party.

His motorcade will pass through several areas where crowds of supporters are expected to gather to cheer him on.

But a spokesman for Gbagbo told AFP there had been no instructions from the government to restrict gatherings.

Celebrations had already begun in Abidjan ahead of his return.

"Tomorrow there will be nothing but singing and praise," said a resident in the Yopougon suburb, considered pro-Gbagbo.

In his home region of Gagnoa, where he is a cult figure, Gbagbo's face has been emblazoned on caps, t-shirts and colourful kaftans proclaiming "The Lion of Africa Is Back."

Preparations have also been underway for Gbagbo's return in his hometown Mama, where they call him "father".

Gbagbo's hometown of Mama is preparing to welcome back the man they call "father". By SIA KAMBOU (AFP)

Joseph Goli Obou, a 71-year-old traditional chief clad in a gown bearing Gbagbo's face, said: "I am getting the whole village swept."

However not everyone is overjoyed at his return.

Groups representing the victims of the 2010-2011 post-election violence have condemned the "impunity" he has received and plan to protest in Abidjan on Thursday.

They also point to a 20-year jail sentence Gbagbo was given in absentia for "looting" the Central Bank of West African States during the conflict.

Authorities have already hinted that this sentence will be lifted.

First elected in 2010, Gbagbo's tenure was marked by division and rebellion in the former French colony nation once seen as a beacon of stability in West Africa.

Elections that should have been held in 2005 were postponed six times until 2010, when he lost to Ouattara. Conflict erupted, leading to his arrest in April 2011 and transfer to the ICC.

His party insists he is returning in peace. In March, it took part in legislative elections, ending a decade-long boycott of the ballot box.

"The wounds are still open... and the authorities are worried that Gbagbo will stir up the crowds again, which is one of his hallmarks," said Rinaldo Depagne, a researcher at the International Crisis Group think tank.

But attention has also turned to a rising Islamist threat after jihadists killed four soldiers near the border with Burkina Faso.

"Above all else, we must form a sacred union" to unite "our efforts to confront the terrorists," prominent pro-Ouattara writer Venance Konan said in a newspaper editorial this week.