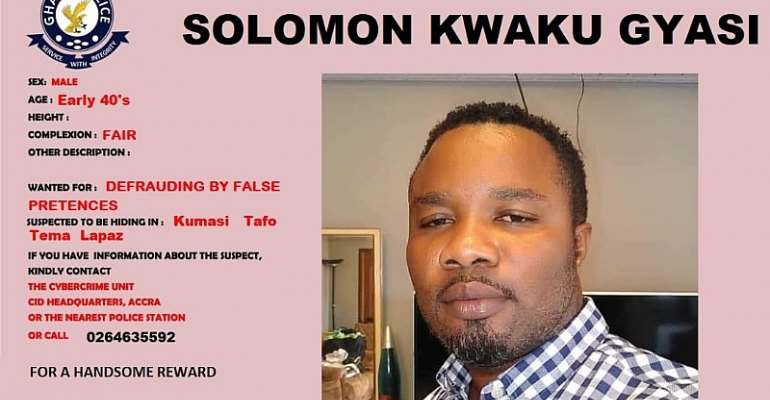 The Cyber Crime Unit of the Ghana Police Service is urging the general public to assist them to arrest a suspected criminal by name Kwaku Gyasi Solomon.

Anyone who provides an information with regards to the whereabouts of the said criminal will be rewarded handsomely.

The suspect Kwaku Gyasi Solomon is also known on some social media platforms as " PASTOR MIKE OR SABRUKU".

Kwaku Gyasi Solomon is a native of Abetifi Kwahu in the Eastern Region. He is fair in complexion, 47 years old, brown eyes, height of five feet and five inches and without any known formal employment.

The suspect is believed to have defrauded a Colombus Ohio-USA based lady with an amount of two hundred thousand dollars with the pretense of building a student's hostel for her at the University of Ghana campus and other stuffs of criminalities.

The wanted person met the lady through Facebook and they became friends.

After getting the confidence from the lady, the suspect began to demand some money from her.

Kwaku Gyasi Solomon is also known to have succeeded in defrauding a rural bank manager at Abetifi and several people in Accra, Kumasi, Tema, Obuasi, Mpraeso, Obomen, Koforidua within the Eastern Regional enclaves. The suspect "Kwaku Gyasi Solomon" at times poses as a pastor, a businessman and as an estate developer in dealings with his victims.

The wanted person Kwaku Gyasi Solomon is believed to be hiding in Accra, Kumasi, Tema and Obuasi.

The Ghana police service and the Cybercrime unit is therefore appealing to the public or anyone who knows the whereabouts of the wanted person "KWAKU GYASI SOLOMON" to assist towards his arrest.

ANYONE WITH INFORMATION ON THE SUSPECT SHOULD KINDLY CALL MOBILE NUMBER 0264635592 OR REPORT TO THE NEAREST POLICE STATION.