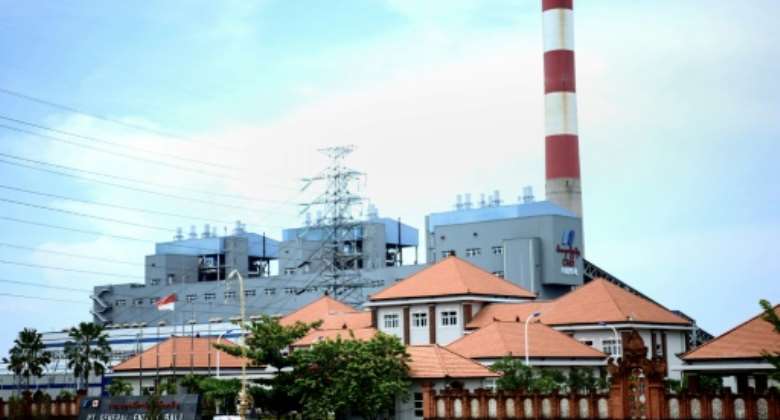 The Celukan Bawang 2 power plant in Singaraja on Indonesia's resort island of Bali is seen in October 2020. By Sonny Tumbelaka (AFP/File)

The global infrastructure plan announced by G7 leaders aims to offer developing nations a credible alternative to China's much-criticized Belt and Road Initiative -- but it faces major hurdles on the ground, especially if Beijing's hiccups are any indication.

US President Joe Biden was able to convince the G7 to sign onto the initiative, drawing allies into Washington's strategic rivalry with Beijing, under a plan titled "Build Back Better World" (B3W) that aims to provide hundreds of billions in infrastructure investment to developing nations.

It is a project that takes a page from China's book, with Beijing already attempting to wield influence and make friends with billions of dollars through its Belt and Road Initiative, albeit sometimes without great success.

The Beijing plan "has under-delivered on many of its promises and generated pushback against China from many countries, creating an opening for the B3W initiative," said Eswar Prasad, a China specialist at Cornell University.

China launched the project in 2013, aiming to develop land and sea infrastructure that would link Asia, Europe and Africa to China.

One such example centers on a hydropower plant constructed on the island of Sumatra in Indonesia, which has been widely criticized for damaging a rainforest that is home to the critically endangered Tapanuli orangutan, the world's rarest great ape.

The West also accuses Beijing of encouraging emerging economies to assume more debt than they can afford, for flashy projects which are not always entirely utilitarian.

"The risks for both the United States and recipient countries raised by BRI's implementation considerably outweigh its benefits," said a task force from the Council on Foreign Relations (CFR), which has scrutinized hundreds of projects and their implications.

In Africa in particular, China has succeeded in obtaining contracts by pricing its projects much cheaper than competitors.

US President Joe Biden takes part in a press conference on the final day of the G7 summit at Cornwall Airport Newquay, near Newquay, Cornwall on June 13, 2021. By Brendan SMIALOWSKI (AFP/File)

"Little by little, the Chinese have eliminated competition from local businesses," a development specialist in Africa told AFP, on condition of anonymity.

"In Mali, there was only one bridge over the Niger River in Bamako, there are now three, soon to be four," he said, stressing that the projects were accompanied by gifts for local political leaders, such as the construction of villas.

The G7 project is touted by the White House as a "high-standard and transparent infrastructure partnership led by major democracies to help narrow the $40+ trillion infrastructure need in the developing world."

But according to the Africa development specialist "it is not so much a question of capital as it is of how to use large sums of money" due to complications from technical difficulties and endemic insecurity.

How can companies be convinced to set up projects in the Sahel in the face of terrorist threats? Once a project is carried out, such as a school, how could it be guaranteed that a teacher would want to settle in a remote region? Why build infrastructure which after completion is likely to be destroyed by local militias?

"The B3W needs to resonate with leaders in developing countries," said Matthew Goodman and Jonathan Hillman, experts at the Center for Strategic International Studies, adding that "many will be eager to expand their options, and the B3W brand could carry prestige as a high-quality effort."

In return, however, the countries will have to accept more control, higher costs and longer lead times.

Finally, the big question remains what role the IMF and World Bank, institutions historically at the heart of development, will take.

In order to remain relevant, they will have to be involved, while simultaneously managing the competing interests of their donors.

The IMF and World Bank, which did not respond for a request for comment, could become "a battleground for influence, as the G7 and China try to mold these institutions' lending patterns in alignment with their own economic and geopolitical interests," Prasad said.