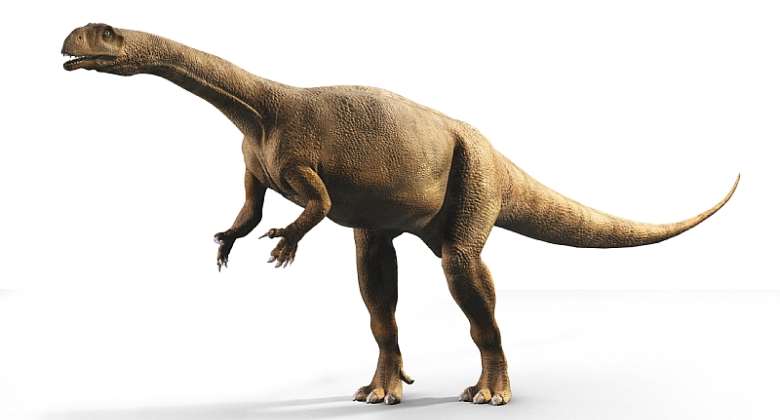 If you ask children what their favourite dinosaurs are, the answers will undoubtedly include T. rex, Triceratops and maybe Brachiosaurus. Those children answering the question in South Africa may be disappointed to discover that none of these dinosaur fossils are to be found in the country.

But South Africa has its own, equally important dinosaurs; the most common and well known of these is Massospondylus, which was first described by scientists back in 1854. This dinosaur was approximately 4-5m long from head to tail, walked on two legs, had a long neck, a small head and ate plants. It lived in the Early Jurassic time period – 200 million years ago – of southern Africa . It was also the ancestor of the colossal creatures so many children can name today: Massospondylus gave rise to giants like Diplodocus.

Massospondylus is a crucial dinosaur for palaeontologists. This is partly because Massospondylus is the most common dinosaur fossil found in southern Africa, and also because there are fossils of these animals ranging in age from embryos still in their eggs, to babies, to adolescents to adults. The oldest mature individual that has been studied reached about 25 years. The range of fossils available means that researchers can study their growth.

For the past eight years, I have been using an array of different methods – computerised tomography (CT) scans, statistics, studying the bones under a microscope – to answer questions about Massospondylus' development.

The more we learn about this species' growth and development, the better we're able to understand the diversity of animals and ecology 200 million years ago.

Part of my work involves understanding how Massospondylus skeletons, especially their skulls, change as they grow up. This is important because if scientists don't know what a species' skull looked like at different ages, they might not be able to accurately ascertain what species existed in a particular place and time.

For instance, a palaeontologist might find two dinosaur skeletons, one big and one small, and assume these belonged to two different species. That would increase the diversity of the past ecology that's being reconstructed. However, if the small skeleton is a baby version of the larger one, this changes the picture.

The best way to look at skulls in detail is to scan them with computerised tomography. CT scans work with X-rays, except that instead of one image, they produce a stack of thousands of images. These can be used to digitally reconstruct the fossil bones in three dimensions and look at features that were inside the bones, invisible to the naked eye. Using these scans, I reconstructed a series of Massospondylus skulls, from babies to adults, and described the shape changes. This now allows us to easily identify fossils as being Massospondylus, or not.

Read more: A fossil hidden in plain sight in South Africa turns out to be a new dinosaur

As a researcher studying how dinosaurs grow, I am interested in the absolute beginning of development: embryos. One of the most famous Massospondylus specimens is a clutch of seven eggs with embryos found in 1976 in South Africa's Free State province. Using high-powered CT scans, I reconstructed the 1cm long skulls of these tiny creatures and compared them to dinosaurs' closest living relatives : chickens, crocodiles, turtles and lizards.

I found that the bones in the Massospondylus embryo skulls developed in the same order as those in animals today. This allowed me to determine that the Massospondylus embryos were only 60% through their incubation period when they were buried. It also means that the skulls of embryos in this group have conserved their developmental sequence for an extraordinary 250 million years of evolution. It's not yet known how far back this pattern goes in evolution but it could potentially appear in very early tetrapods (four-limbed animals). Tetrapods go through a lot of changes in evolution, so having a constant feature is quite significant and indicative that you don't mess with a good thing.

These scans can also be used to digitally fill in empty spaces where soft tissues like brains and inner ears once were. Inner ears are made up of canals and a chochlea filled with fluid that help with balance and hearing. The shape and size of these can tell you a lot about an animal's behaviour. This, in turn, can help us look at posture – did it change during growth, or during evolution – as well as whether creatures had specialised behaviours like burrowing, swimming, flying or extraordinary hearing.

Since the eggs' discovery in 1976, it was believed that Massospondylus babies hatched on four legs and that, as they grew, they shifted to walk only on their back legs. This has implications for the evolution of posture in dinosaurs. However, my colleagues and I found that the inner ears of Massospondylus do not show any indications of this shift.

Another way to determine posture in animals is to look at how thick their arm bones (humeri) are compared to their leg bones (femora). Animals that walk on two legs have thicker femora, where they carry all their weight; animals that walk on four legs, meanwhile, distribute their weight evenly, making their humeri almost as thick as their femora. Massospondylus bones show that both babies and adults have thicker femora, and that they probably walked on two legs their entire lives.

Although Massospondylus is teaching scientists a lot about early dinosaur evolution and growth, there is still a lot to learn about it. This includes learning more about the structure of its eggs, how long their incubation period was, or how the rest of the skeleton changed during growth.

Kimberley E.J. Chapelle received funding from the DSI/NRF Center of Excellence in Paleosciences, the Palaeontological Scientific Trust, and the Kalbfleish Fellowship through the Richard Gilder Graduate School of the American Museum of Natural History