Who is to blame for our economic woes? 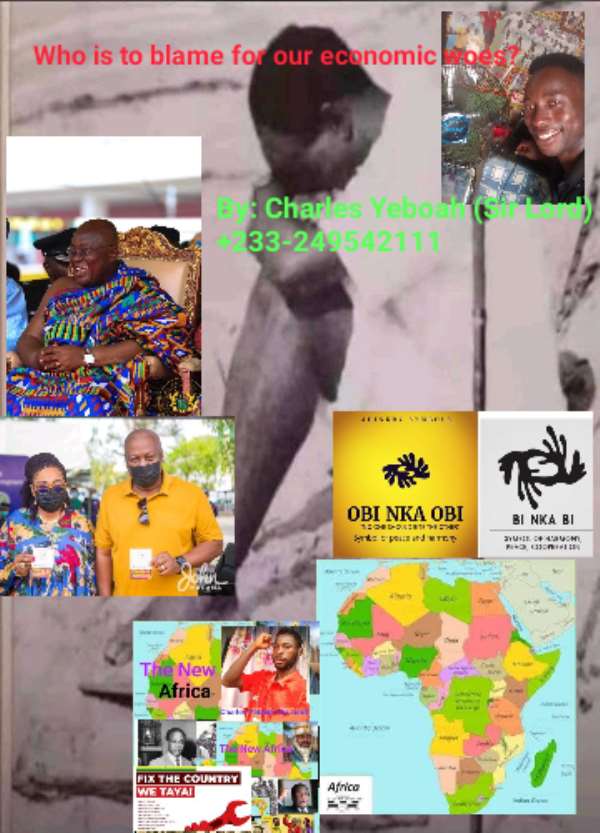 To wit: Let's learn from the misery of others.

The issues with inflation, all those economic indicators, increment and high cost of living, is not just limited to one government, previous or today, here in Ghana and elsewhere in Africa. It's linked to many factors that our current divisive nemesis ridden partisan politics can do little to handle.

The strings pulling into perpetual abyss our development is stronger than what any one political party since our Republican status can battle against.

Don't you wonder when all elected governments in their first state of nation addresses paint a bleak picture of the economy and mention the failures of their predecessors?

They always say: _"we thought this and that were there, but no more. We met almost nothing in the coffers."_

In the francophone countries, say Ivory Coast, inflation stills more than Ghana's. But behind the scenes, their colonial masters France, keep more than 60% of their foreign reserve in the French Bourse, and managed by the French finance minister. So Côte D'Ivoir is literally a puppet of France. Who a African president challenges this patronage imperialistic tapestry will pay with the life or for cheapest, be ousted.

Read about what led to the political demise of Sylvanus Olympio of Togo, Thomas Sankara of Burkina Faso, and Laurent Gbagbo of Côte D'Ivoire.

You see, when Ghana opted for total freedom from the colony of Britain, we've been paralysed to this ignominy of a maze of unmanageable economy. And this matters not if you're a scholar of whatever height. Isn't it from their books you quote your economic terminologies?

And I laugh always when people for sheer disrespect or ignorance ⁩ make little of Dr. Mahmoud Bawumia's academic prowess. You may really not know the man you're discussing with your now cradling economics age. Partisanship aside, if not for envy, those who know what true economists are would want to listen to again and again when the Vice president of Ghana mounts a podium and use facts and figures to paint a hopeful economic fortunes for Ghana.

The reality is, factors on the ground will forever subject, for want of a fitting word, (not pun intended), this his _"histrionics"_ into paper beauties and tea partying photo opportunities.

Nothing works in our interest without the leave of the powers that be, the controller of our bequeathed resources.

*If we're to stop this NDC and NPP combative race to outdo one another, Ghana can live better days in yonder. A change of regime should be a substitution of names of individuals not our economy. A new president assuming office must inherit a continuity of growth, not a zero start to build from the wreckages of the old mess.*

See Israel today, the people are tired of fighting perpetually amongst themselves. They've realised Benjamin Netanyahu may be the cause of their divisiveness. Political parties with different ideologies (Arabs, moderate and ultra-Orthodox Jews, Christians. .. have joined alliance using Naftali Bennett to push out Netanyahu. They want to coexist in peace.

_Can't Ghana and Africa pick a leaf from this good example?_

A united spiderweb, as my native Goka people say it: _can trap the prowling lion._

Inasmuchas our resources are resourced always by the God Almighty, and we don't run out of bargaining chip, there's still hope if we can unite.

As in the preamble, the Bono aphorism is about a tree that is planted on the grassland, as it was burnt charcoal black, the sprouting new tree of same kind naughtily asked why the old tree was so black. And the old tree only asked the younger one to exercise patience and wait for harmattan. And when the grass was dry, the land was set ablaze, and the new beautiful tree also got burnt black.

For a moral lesson, the young tree should have helped the old tree to look for their number one enemy (fire) and deal with, instead of making shaming and name-calling comparisons.

United we build, divided we fall.

*Voice Of The Lord Ministry*