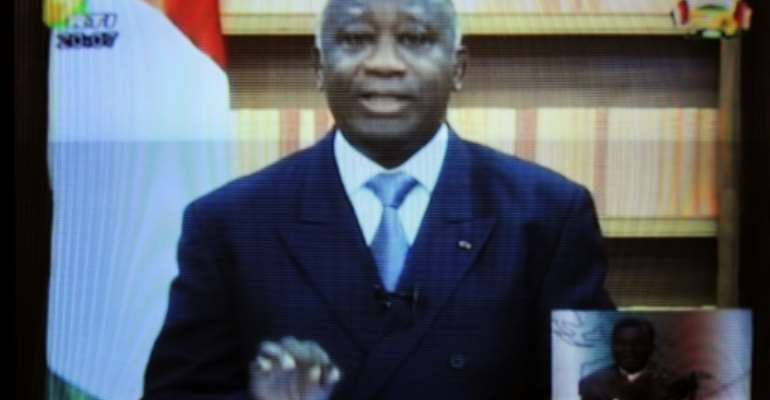 Gbagbo helped Ivory Coast's drive to a multi-party democracy, became its elected president and then, pictured above in December 2011, refused to concede defeat at the ballot box. By ISSOUF SANOGO (AFP/File)

Key dates in the life of former Ivory Coast president Laurent Gbagbo, who is scheduled to return home on Thursday after being acquitted of crimes against humanity in The Hague.

- May 31, 1945: Born in the south-central Ivory Coast region of Gagnoa, to the Bete ethnic group. Educated in a Christian seminary.

- 1971: Becomes a history professor. Emerges as critic of Ivory Coast's post-independence single-party system. He is imprisoned for almost two years for "subversive" teaching.

Gbagbo, pictured in the 1990 election campaign. By PASCAL GUYOT (AFP)

- 1990: Is the sole opposition candidate at presidential elections against Felix Houphouet-Boigny, the father of Ivory Coast's independence, after a multiparty system is introduced.

- September 2002: Renegade soldiers try to oust Gbagbo. Rebels take over the north of the country but the government retains control of the south.

- 2005: The presidential election is postponed for the first of six times before finally being held in 2010.

- April 11, 2011: Arrested in Abidjan after more than four months of crisis after he refuses to acknowledge defeat at the November 2010 election against Alassane Ouattara. More than 3,000 people die.

- November 30, 2011: Is transferred to the International Criminal Court (ICC) in The Hague.

- January 15, 2019: Acquitted by the ICC on charges of crimes against humanity. Freed on strict conditions in February pending a prosecution appeal. He lives in Belgium.