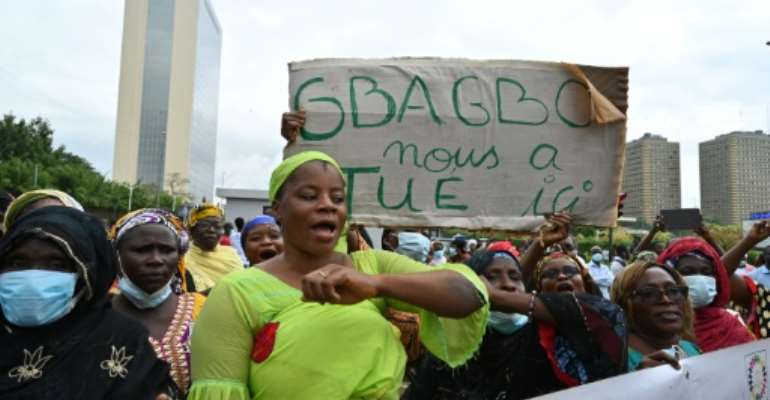 Shells rained down on Mathurin Kouassi's home in Ivory Coast's economic hub Abidjan in March 2011 when the country was engulfed in a post-election conflict that claimed some 3,000 lives.

A decade after shrapnel cost him the use of his right hand, Kouassi cannot understand why hardly anyone has been brought to justice over the bloodshed.

"I can't do anything anymore," he said. "Masonry is impossible (and) I can't find any odd jobs."

In the chaos, Kouassi was left to his own devices. "There was a stampede. At the hospital, they only operated on very serious cases."

The fighting erupted after outgoing head of state Laurent Gbagbo refused to accept his defeat in a November 2010 presidential election by Alassane Ouattara, whose victory was recognised by the UN.

In Kouassi's Abobo neighbourhood, seen as pro-Ouattara, civilian targets were hit including a market and demonstrating women.

Gbagbo was seized on April 11, 2011, and handed over to the International Criminal Court in The Hague, which tried him for crimes against humanity but definitively acquitted him in March.

Now 76, he is due to return home on Thursday in what is seen as a test of stability in Ivory Coast, where bitter memories sap hope for the future while his supporters in the Ivorian Popular Front (FPI) party are delirious with joy.

Former foes in the Ouattara and Gbagbo camps have called for "national reconciliation", but few people have been convicted of the violence, leaving victims disabused and resentful.

In April, a former warlord and hired thug in western Ivory Coast, Amade Oueremi, was sentenced to life in prison over the March 2011 massacre of 817 people in a single day in Duekoue, a town in a region seen as pro-Gbagbo. But the trial shed little light on those who ordered the bloodshed.

Gbagbo's wife Simone was amnestied in the name of national reconciliation. By Aristide Bodegla (AFP/File)

A 2018 amnesty law led to several releases including that of Simone Gbagbo, the former first lady, in the name of national reconciliation.

The shelling that cost Kouassi his hand led to a trial before a military court, but all the defendants were acquitted. "As long as we do not know the person responsible, we cannot forgive," he said.

Issa Bokoun, owner of an imposing mosque in Kouassi's neighbourhood, sheltered local residents during the fighting.

Bokoun was also hit by shell fragments and left unable to walk for eight months. He testified before the military court and was shocked by its not guilty verdict.

'President Laurent Gbagbo arrives for a true reconciliation of Ivorians', reads a poster at a pro-Gbagbo rally. By SIA KAMBOU (AFP)

Soon afterwards, Ouattara met with him and other victims. "He asked us to forgive, for national reconciliation," Bokoun said.

He was fatalistic about Gbagbo's homecoming, saying: "We will accept this return. I leave it in God's hands."

Many across the former French colony wonder whether reconciliation can take hold in the nation once seen as a beacon of stability in West Africa.

Prayers for reconciliation: Many wonder whether Ivory Coast can heal its wounds. By SIA KAMBOU (AFP)

"In the absence of truly credible legal proceedings and a political process that can put its finger on what went wrong... I fear there is no reason to be optimistic about the possibility of maintaining peace and political stability for long," said Gilles Yabi, founder of the West African political analysis centre Wathi.

Issiaka Diaby of the Collective of Victims in Ivory Coast noted that the country has seen several amnesties over the past 30 years, saying: "This creates impunity and paves the way for other crimes."

Notably, Gbagbo was convicted in absentia of "looting" the Central Bank of West African States (BCEAO) during the 2010-11 conflict, and sentenced to 20 years in jail.

Authorities have already hinted that this sentence will be lifted, and Diaby said he plans to be part of an airport protest on Thursday demanding that it be enforced.