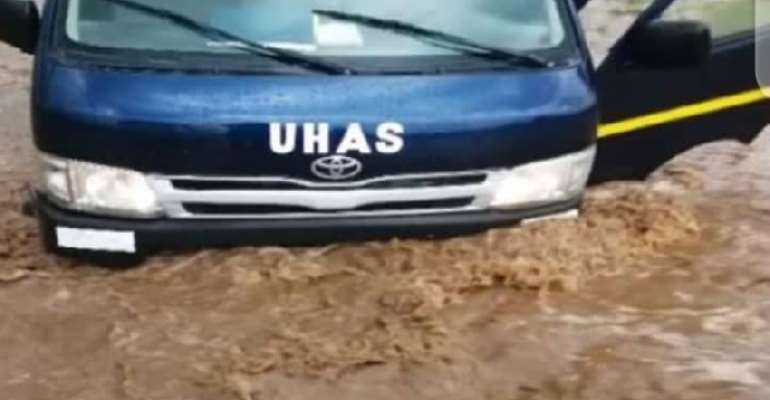 The Volta Regional Communication Officer of the National Democratic Congress (NDC), Sorkpa K. Agbleze has described as pathetic the state of the roads in, around and leading to the University of Health and Allied Sciences (UHAS).

This follows a report on Modernghana.com earlier this month that revealed how the roads leading to the University in Ho, have turned into fish ponds and at some point, muddy which is capable of building thatch rooms.

The poor state of the roads is an eye-saw with vehicles unable to move since the rains started.

Students and tutors have to endure the pain of spending hours on the muddy road. In worst-case scenario, vehicles get stuck and students including tutors have to get down from their vehicles to push and in the process also get stuck.

With the attention of the NDC Volta drawn to the appalling situation, Sorkpa K. Agbleze says the challenge of the University is ironic particularly after the government has tagged this year as the year of roads.

“The UHAS roads are pathetically inaccessible for the students and lecturers, especially in this rainy season. Few days ago, the Metro Mass Transit that conveys students to lectures got stuck in the mud so were other vehicles that ply the roads on the UHAS campus.

“[It is] pathetic and quite ironic that the year which was described as the year of roads by H.E. the President has seen very little or nothing as far as road construction in the Volta Region is concerned,” the Volta Regional Communication Officer has said in a statement.

The Volta NDC wants the ruling New Patriotic Party (NPP) government to as a matter of urgency fix the roads for UHAS, the health facility that serves as the COVID-19 testing centre for Volta, Oti, and parts of the Eastern region.