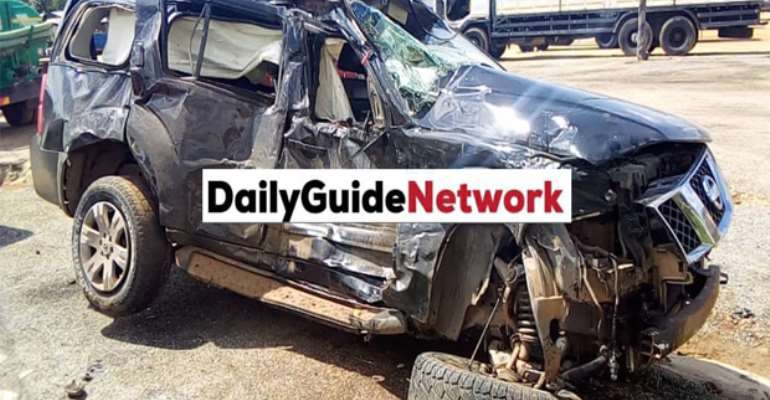 The Chinese Man vehicle and the mangled minibus

A Chinese National, Sun Hong, 45-year-old has met his untimely death when his car was involved in a fatal accident at Apeitu near Suhum on the Accra- Kumasi Highway in the Ayensuano District of the Eastern Region over the weekend.

The deceased was driving a Nissan Pathfinder 4×4 with registration number GC 1787-12 from Accra direction towards Kumasi when on reaching a section of the road at Apeitu, a V8 vehicle on a high speed from Kumasi to Accra direction made an unsafe overtaking in his direction.

According to a Police report sighted by DGN Online, in an attempt to avoid crashing into it, the deceased swerved to the offside pavement.

But in the process, he lost control of the steering wheel and the vehicle veered from his lane onto the opposite lane and crashed with a Toyota Hiace minibus with registration number GT 404-21 driven by a driver not yet known with passengers on board from Kumasi to Accra direction.

It was gathered that all the passengers onboard both vehicles including the drivers sustained injuries and were rushed to Suhum Government Hospital for treatment.

The Chinese, Sun Hong was pronounced dead shortly on arrival, with his body deposited at the same Hospital mortuary for autopsy.

The Police from Suhum later visited the scene on Saturday afternoon and towed the mangled vehicles from the scene to a safer place for testing as investigations are ongoing.