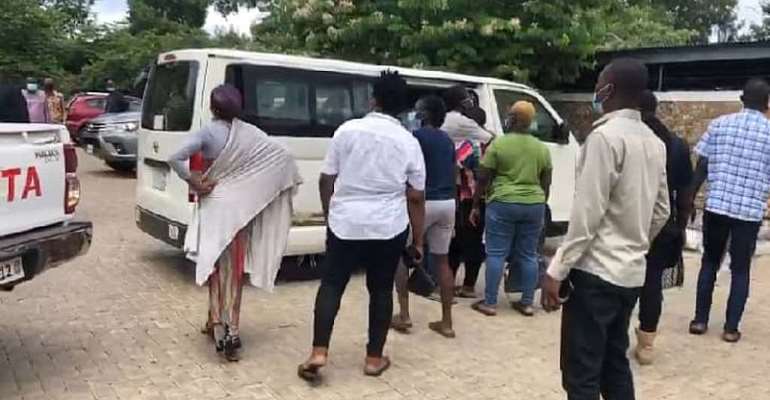 The state has debunked suggestions that it violated the rights of the 21 persons standing trial for promoting LGBTQI activities at Ho in the Volta Region.

The 21 have been in detention in Ho since their arrest on May 21, 2021, but were granted bail on Friday, June 11, by the Ho High Court 2 after several applications were denied.

Lawyers for the 21 have accused the state of abusing the rights of their clients, but State Attorney, Moses Ayini Asampua, says they were treated lawfully.

“There are some arguments about human rights, but we only held them for investigations, and they were not subjected to any mistreatment. The police even spent money to feed them. No one touched them or did anything physically against them. So, the delay in the granting of bail was largely contributed by the suspects and lawyers”.

“If they had exercised restraints, they would have been granted bail, but because they had gone to the High Court, and it delayed them. So I don’t think we intentionally delayed the granting of the bail to infringe on their rights as Ghanaians” he explained.

The activists have been granted bail in the sum of GHC5,000 for each applicant with one surety each.

The substantive case would, however, be heard at a later date.

Some items retrieved from the accused persons included an LGBTQI+ Muslim, a book used during their gathering, and their mobile phones, which were in the custody of the police for further investigations.

According to the police, the programme was sponsored by some organizations championing the activities of LGBTQI in Ghana and elsewhere.

Some persons have called for a specific law in Ghana to make homosexuality a criminal offence.

Although there are some provisions in the Criminal Code under which a homosexual can be prosecuted, especially for having intercourse with a partner, the belief is that a specific law must be enacted to declare homosexual relationships illegal.

Others have also called for a review of Ghana's laws to be more accommodating of minority groups as many countries are decriminalizing homosexuality.

According to a statement from the presidency, President Akufo-Addo will not legalise such a relationship in Ghana.

“Indeed, the President remains focused on delivering on his mandate and improving the quality of lives of the Ghanaian people. It will NOT be under his Presidency that same-sex marriage will be legalised in Ghana,” the statement signed by the Director of Communications at the Presidency, Eugene Arhin added.

The statement was a response to some claims allegedly made by the General Secretary of the opposition National Democratic Congress (NDC), Asiedu Nketiah, who reportedly told NDC members in Kumasi that “Nana Addo says men will marry men, and women will marry women.”