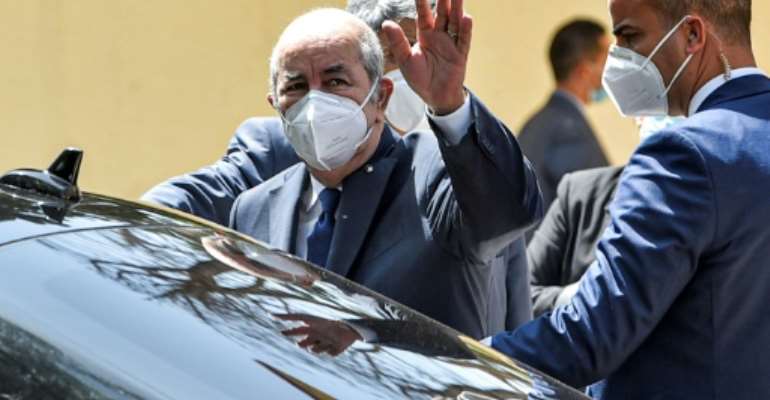 Algerian President Abdelmadjid Tebboune waves after casting his vote at a polling station on the western outskirts of capital. By RYAD KRAMDI (AFP)

Algeria voted Saturday in a parliamentary election boycotted by the long-running Hirak protest movement and marked by a high abstention rate.

Pro-government parties had urged a big turnout for the "crucial vote" hoping to restore stability after two years of turmoil since the ouster of veteran president Abdelaziz Bouteflika under pressure from the protests.

The Hirak movement, which had held weekly demonstrations for reform until they were effectively banned last month, rejected the polls as a "sham".

Seven leading protest movement figures were arrested ahead of polling day while police deployed heavily in the capital Algiers to preempt any attempt to rally.

By comparison, turnout was 35.7 percent for the last legislative vote in 2017.

President Abdelmadjid Tebboune, who was elected on an official turnout of less than 40 percent in late 2019, put a brave face on the low turnout.

"For me, it's not the turnout percentage that's important, it's whether the lawmakers that the people elect have sufficient legitimacy," he said after casting his vote in Algiers.

The shape of the new assembly should emerge on Sunday but it will be 96 hours before official results are announced, Chorfi said.

More than half of the candidates in Saturday's election are listed on the ballot paper as independents. By RYAD KRAMDI (AFP)

In Algiers, only a trickle of people was seen entering polling stations, AFP correspondents said.

"I've never voted, and this time it's no different. I don't believe it would change anything," said Fatiha, a shopkeeper in her 50s.

Hamid, a 60-year-old office manager, said he voted for the sake of "stability".

In the opposition stronghold of Kabylie, a mainly Berber region east of Algiers, most polling stations in the main cities of Bejaia and Tizi Ouzou remained closed, the Algerian League for the Defence of Human Rights (LADDH) and the CNLD prisoners' right groups said.

Scuffles broke out in Kabylie, where ballot boxes were ransacked, and security forces detained dozens of people, the two groups said, with the CNLD also reporting arrests in Algiers and the nearby city of Boumerdes.

More than 13,000 candidates stood for the 407 seats in parliament, more than half listed as "independent".

Turnout was slow in the capital Algiers but was expected to be higher in rural areas. By RYAD KRAMDI (AFP)

The protest movement has urged boycotts of all national polls since it mobilised hundreds of thousands of people in 2019 to force Bouteflika and his cronies from power, after the ailing president launched a bid for a fifth term.

It returned to the streets in February after an almost-year-long break caused by the Covid-19 pandemic.

But the government stepped up its crackdown last month, blocking protests and detaining hundreds of activists who have defied new restrictions on public gatherings.

The three were released on Friday night, a campaign group said.

"These arrests mark a chilling escalation in the Algerian authorities' clampdown on the rights to freedom of expression and association," Amnesty International said, reporting more than 200 people were in detention in connection with the protest movement.

Tebboune claims to have responded to the protesters' main demands "in record time", and says those still protesting are "counter-revolutionaries" in the pay of "foreign parties".

Security forces have deployed in strength to prevent reform movement protests like this one in Algiers on May 7. By RYAD KRAMDI (AFP)

But the Hirak says Tebboune's past role as premier under Bouteflika confirms its narrative that the old guard, in power since Algeria's 1962 independence from France, retains an undiluted grip on power.

Islamist parties are hoping to take advantage -- but with their vote split between five rival factions, they may struggle to make real gains.

Africa's fourth-largest economy is heavily dependent on oil revenues, which have slumped in the face of the global economic slowdown. Unemployment stands at more than 12 percent, according to World Bank figures.

It has also been hit hard by the coronavirus pandemic, which has claimed more than 3,500 lives in the country, according to the health ministry.