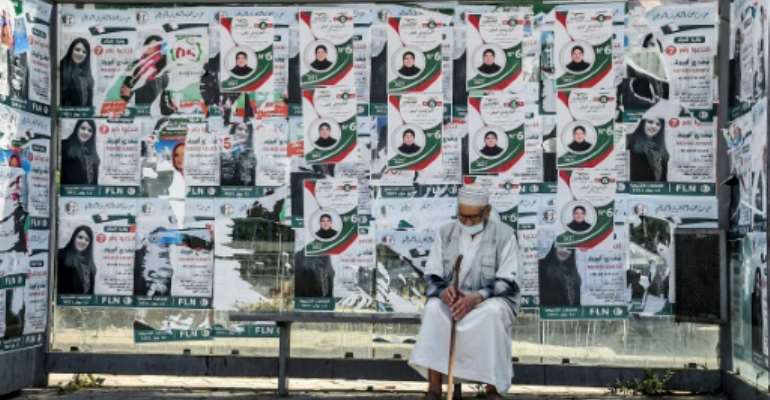 An Algerian sits in front of campaign posters in the capital Algiers on Friday, a day before legislative elections. By RYAD KRAMDI (AFP)

Algerian police deployed heavily in the capital Friday ahead of parliamentary elections to block protesters disrupting the polls, as activists criticised a "climate of repression" amid arrests of opposition figures.

Large numbers of police officers patrolled the streets of Algiers, blocking roads to preempt any attempt by supporters of the long-running Hirak pro-democracy movement to gather, AFP correspondents reported.

Saturday's poll comes as authorities seek to bolster their legitimacy and take the wind out of the sails of the Hirak, which returned to the streets in February following an almost year-long break due to the coronavirus pandemic.

The Algerian League for the Defence of Human Rights said seven leading protest movement figures had been arrested on Thursday evening, five in Algiers and two in other parts of the country.

"This repressive atmosphere and the restrictions placed on human rights and freedoms mean these elections have no democratic value," its vice president Said Salhi told AFP, adding they did not know "the grounds for these arrests".

Back in 2019, the Hirak mobilised hundreds of thousands to force longtime president Abdelaziz Bouteflika to resignation, after he launched a bid for a fifth term.

It has urged boycotts of all national votes since then.

A presidential election 18 months ago, won by Abdelmadjid Tebboune, attracted a turnout of less than 40 percent, even according to official figures.

Among those detained in Algiers were leading opposition figure Karim Tabbou and independent journalist Khaled Drareni, as well the director of a pro-reform radio station, Ihsane El Kadi.

Drareni was being held in a barracks on the outskirts of the capital. His only contact with his family was a 1:30 am phone call, his lawyer Zoubida Assoul said.

The journalist was only released on bail in February after being detained while covering a mass demonstration in the capital in March last year.

Tabbou and Ihsane El Kadi were being held in the same barracks, their lawyers said.

Campaigns have been largely lacklustre -- but some have held lively rallies, such as the Movement of Society for Peace (MSP) party, on June 8. By RYAD KRAMDI (AFP)

"These arrests mark a chilling escalation in the Algerian authorities' clampdown on the rights to freedom of expression and association ahead of the elections," Amnesty International said in a statement, reporting over 200 people were in detention in connection with the Hirak movement.

"Instead of rounding up journalists and political opponents in a bid to crush dissent and intimidate members of the Hirak protest movement, Algeria's authorities should focus on respecting their human rights obligations."

Algerian police have recently been deploying to stop anti-government demonstrations, as seen in this picture from Algiers taken on March 30. By RYAD KRAMDI (AFP)

On Friday, security forces set up roadblocks on key routes into the capital, with police trucks parked at major junctions.

The streets were largely quiet -- with many in the capital heading to the city's beaches instead.

But in two towns in Algeria's northeastern Kabylie region, Tizi Ouzou and Bejaia, hundreds of marchers chanted slogans saying the upcoming vote was flawed, and accusing the current administration of links to Bouteflika.

The International Crisis Group said in May that Algeria's situation had "deteriorated", noting that the authorities had "stepped up repression" against Hirak supporters ahead of the polls, "quashing demonstrations and arresting scores".

Since last month, the government has clamped down on the weekly protests of the Hirak reform movement, detaining hundreds of activists who have defied new restrictions on public gatherings.

Prior approval is now required from the interior ministry, an impossible demand for a movement that prides itself on having no formal leadership, making all of its demonstrations effectively illegal.

A presidential decree published in the official gazette on Thursday opens a new avenue for the prosecution of Hirak activists by changing the penal code's definition of acts of terrorism.

It establishes an official blacklist of individuals and entities suspected of terrorism that could be used against activists, opposition leaders or journalists.

"In Algeria, the authorities no longer pretend to organise serious elections," Reporters Without Borders chief Christophe Deloire said on Twitter, criticising the arrest of Drareni and other Hirak members.