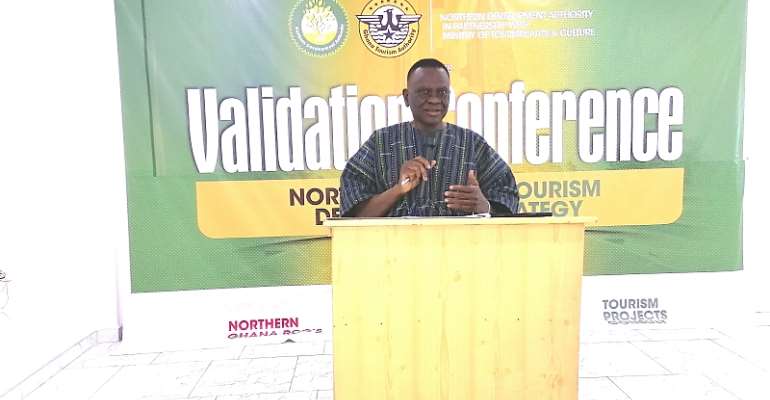 The workshop held in Tamale brought together Ghana Tourism Authority, Ghana Cultural Forum, University for Development Studies, National Commission on Culture, Creative Arts Agency, Centres for National Culture in northern Ghana, Tourism Projects Consult, Ghana Tourism Federation and the Northern Development Forum among others to validate the draft strategy developed by then SADA now NDA between 2016 and 2017 under the auspices MOTAC.

The draft strategy, according to the Acting Chief Executive Officer of the NDA, Hon. Boniface A. Gambila has an overarching objective of leveraging the rich tourism and cultural resources in the Northern Development Zone to competitively position northern Ghana as a preferred tourist destination in Ghana and the West African Sub-Region.

“This strategy is Northern Ghana focused and outlines specific actions and targets aimed at developing a vibrant tourism industry to create jobs, reduce poverty, and above all increase per capital income in the zone”, Hon. Boniface stressed.

The Acting CEO of NDA disclosed that the development of tourism, culture and creative arts sectors of the North is at the core of the Northern Development Authority’s mandate which is a vehicle to accelerate the overall social-economic development of the Zone and to complement government’s aggressive campaign and intervention such as the patronization of made in Ghana goods, back to Africa Heritage drive and rehabilitation of major trunk roads to the northern parts of the country.

“It is no doubt that Northern Ghana comparatively possesses a plethora of scenic natural tourist attractions, a melting pot of rich diverse cultures, an ingenious creative arts and warmth, which when well packaged and marketed, will attract the much-desired foreign exchange earnings for the zone”, Hon. Boniface A. Gambila stated.

Hon. Mohammed Awal, Minister for Tourism, Arts and Culture (MOTAC), in a speech delivered on his behalf by Dr. Alphonse Kumaza, Head of Monitoring and Evaluation at MOTAC said he is determined to develop two iconic tourism attractions in each of the five regions of the north to kick-start the development process and stimulate growth to address the human and social development quagmires while creating visibility to magnetize domestic and international tourists and visitors.

He expressed his appreciation to the Northern Development Authority especially its AG CEO, Hon. Boniface Gambila for seeing through the development of a Northern Ghana Tourism Development Strategy which validation has been put before key tourism stakeholders for inputs and finalization. Adding, “the northern sector of Ghana is arguably endowed with tourism assets ranging from nature, antiquity and culture, which undoubtedly, yet untapped and therefore deserves mentioning”.