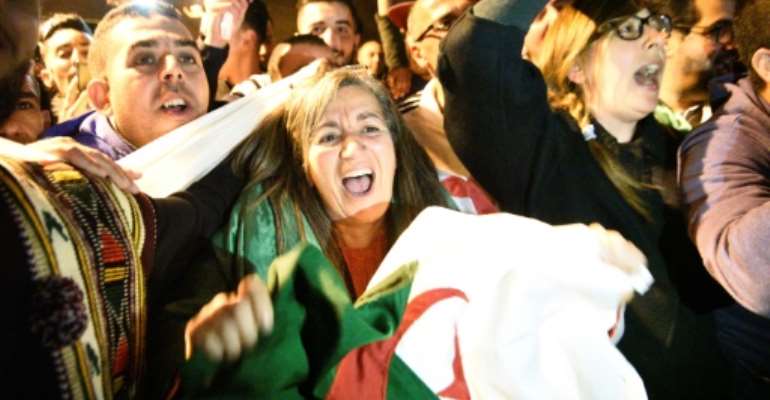 Two years ago, hundreds of thousands of Algerians poured onto the streets for weekly demonstrations that forced out their longtime president, but after the government crushed its protests last month, the reform movement is struggling to stay relevant.

The country goes to the polls on Saturday for its third national election since president Abdelaziz Bouteflika quit, and again the movement -- Hirak in Arabic -- has been sidelined, its appeals for a boycott confined to social media.

A combination of the Covid pandemic and tight new restrictions on public gatherings have largely kept demonstrators off the streets.

Only the opposition stronghold of Kabylie, a mainly Berber region east of Algiers, has seen significant protests during the run-up to the election.

In the rest of the country, demonstrations have been nipped in the bud by the arrest of hundreds of their ringleaders.

What prompted the iron fist?

The military, which forced the departure of Bouteflika and his cronies to neutralise demands for more radical reforms, has made no secret of its determination to see order restored under the guise of a "new Algeria".

Since his election in December 2019, President Abdelmadjid Tebboune has stuck doggedly to the military's roadmap for fresh elections without major changes to longstanding rules.

The protesters' ambitious demands for a democratic transition towards popular sovereignty and an independent judiciary have been cast aside, derided as the agenda of an extremist fringe working at the behest of Algeria's foreign enemies.

The military's hopes of legitimising its policy of limited reform have taken a battering at the polls, with record low turnout for both Tebboune's election and a constitutional referendum last year.

So for the last piece in its electoral jigsaw, the government has adopted an iron fist, requiring prior approval from the interior ministry for all public gatherings: an impossible demand for a protest movement that prides itself on having no formal leadership.

For Amel Boubekeur, a sociologist at the School for Advanced Studies in the Social Sciences in Paris, the election is a way for the regime to go through the motions of democracy without enacting change.

"Power needs to renew itself -- or to give the illusion of renewal -- and to renew its legitimacy through elections," Boubekeur said.

The overwhelming public support for the 2019 protests that ended the ailing Bouteflika's two decades in power has left his successors with a delicate balancing act.

On the one hand, Tebboune's government has made the protests' February 22 launch date a "national day of brotherhood and cohesion between the people and the armed forces for the sake of democracy."

The "blessed movement" that spearheaded the protests even gets a mention in a preamble to the revised constitution adopted in last year's referendum.

On the other hand, Tebboune and the official media routinely distinguish between a "genuine" protest movement he says served the nation's interests and a newer version he says is in the pay of its enemies.

More than two years after the triumphant street celebrations that greeted Bouteflika's resignation, the movement's activists face what many see as an impossible dilemma.

If they embrace a political path, they risk being forced to make unpalatable compromises with a system of governance they despise.

If they remain true to their principles and keep out of the political fray, they risk losing their relevance.

The protest movement has always been a broad church, with both Islamists and secular democrats among its supporters, and it is divided too over whether to go into politics.

For the time being, those that think it should not are in the majority.

"There is a regime which is organising elections and there is a people who have taken to the streets," said leading protest figure Karim Tabbou, who was arrested late Thursday outside his home.

"There is a system of repression ready to use all means at its disposal to prevent change."

For journalist Abed Charef, the upshot is that the protest movement has done only half the job.

"The movement shattered the old order in Algerian politics, but it has so far failed to usher in a new one," he said.