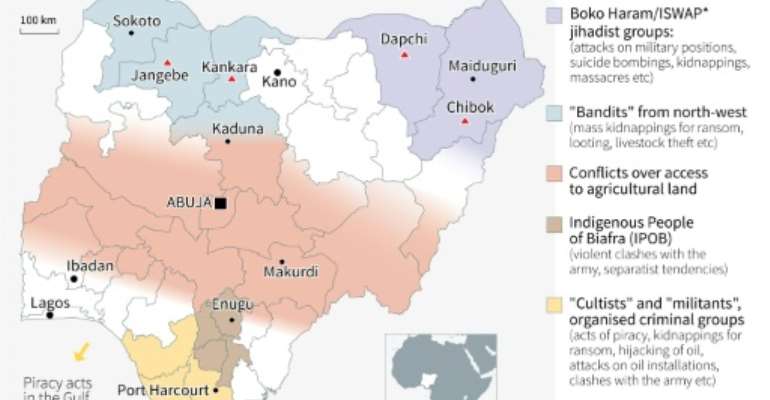 Kidnappings, conflicts and insurgencies in Nigeria. By Gal ROMA (AFP)

Gunmen have attacked a college in northwest Nigeria, killing one student and kidnapping five other people, a teachers' union and an official said on Friday.

The attack late Thursday on the Nuhu Bamalli Polytechnic in Zaria, Kaduna State, is the latest in a string of abductions at schools and colleges in Africa's most populous nation.

Two academic staff and three students were kidnapped and two other students were shot, one of whom died on Friday morning, Aliyu Kofa, chairman of the college's teachers' union, said in a statement.

The gunmen also took the wife and two children of one of the staff members, but released them soon after.

College rector Mohammed Kabir Abdullahi earlier confirmed the incident to AFP, but could not give any details on the number of people abducted.

Gunmen have increasingly turned their attention to schools and colleges, dragging groups of students into their forest hideouts to negotiate ransoms from parents and officials.

Earlier this month gunmen kidnapped 136 children during a raid on an Islamic seminary in Niger state in a mass abduction.

Since December last year, more than 850 children and students have been abducted from schools and colleges across Nigeria, although most have been released soon after negotiations between gunmen and officials.

Mass kidnappings are just one of the challenges facing President Muhammadu Buhari.

Nigeria's security forces are also battling a jihadist insurgency in the northeast and rising separatist tensions in the southeast.