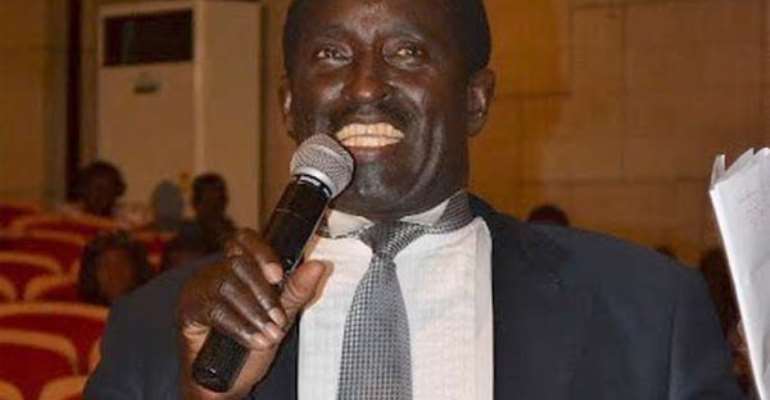 The year was 1997. I was a private lawyer in Accra. My mother died and I motored down to JINJINI near Berekum for the funeral. From the cemetery we all gathered in my mother's house, over some bottles of drinks and as we drank we talked about several issues.

My mother was a staunch Christian, for over twenty years the Senior Presbyter of the Jinjini Presbyterian Church. She covered all her 10 children with the wool of Christianity, never getting us involved in “family affairs”.

It was at this post-cemetery discussions that I realized to my complete shock that through my mother's royal blood, I could be enstooled as Krontihene of NAMASUA or BIADANHENE and Akwamuhene of Berekum Traditional Area and finally DWENEMHENE and Omanhene of Awusa Traditional Area in Jaman South District. Wow!!!!

I came back to Accra a new man, conscious of the “Royal” blood running through my veins. I became MP and Deputy Minister, NPP intra party politics and running around until March 2020 while lying on hospital bed at 37 recovering from surgery I had a strange phone call:

“Captain, our Head of family has resigned. The elders have decided that because of the seniority of your mother you are now the new Head of Family” and that was it.

I walk in Accra going to Court and freelancing as articles writer for newspapers, but in Berekum I am the Head of family of the Nana Yaw Woro Royal family of Biadan, with over 2,000 members!!!! Hardly a week passes by without my name “Nana Nkrabeah Effah Dartey” not being mentioned in a radio funeral announcement!!

Saturday 21st March 2021. I arrived in Berekum at about 5am after a tortoise driver had used 8 hours to drive from Accra to Berekum. I had so many things to go through that day, so I decided to steal some two hours sleep before starting the day.

Just as my eyes started to slip into sleep the mobile rang: “Captain, your mother's brother, Woya Yaw Kuma has just passed away at the Family House. You should be there before they take the body to the mortuary”.

Within 15 minutes I was in the family House, and I saw the emaciated very skinny tiny shell of the remains of Wofa Yaw lying on the mat in his bedroom, covered with the bedsheet. I stood there for a few minutes and pronounced the words: Wofa, Okwan so kose kose” (Uncle, farewell).

Thereupon two young men lifted my uncle and put his cadaver into a taxi to Berekum Holy Family Hospital mortuary where my name as the former MP for Berekum secured my uncle proper attention.

Two weeks later I went to Berekum for the “one week” but after we had gathered under canopies, I was warned: “Captain, you cannot sit here and say you are doing “one week: Wofa Yaw was Nifahene of Biadan, so as a chief, we have to “tren” him, with the blessing of the Biaden Traditional Council.

So, I told the gathering that “family members” I am the Head of Family. I don't know and I have not heard that my uncle Wofa Yaw is dead. All I know is that my uncle has gone for “medical attention: I will here and now send a delegation to Biadan Traditional Council to inform them while we all await the result of his “medical attention”. If any of you says Wofa Yaw is dead and the Biadan Traditional Council imposes a fine on you, don't call me”.

Word reached me that Biadan Traditional Council would “tren” my uncle, Nifahene, on Saturday 5th June 2021 at Biadan.

Did I say I used a tortoise driver the other day? Well, this time, it was an Air Force Jet Pilot, AFOKO by name – I left Kasoa at 11pm Friday 4th June and by 3am I was in my bedroom at Berekum!!!! He was not driving – he was FLYING!!!!

At 9am, Saturday 5th June 2021, escorted by my newly formed Nana Yaw Woro Cultural Group, I arrived in Biadan, to attend the “Wofa Yaw Train” at the main funeral grounds.

At about 10:30am I was told that Biadan Traditional Counsel has assembled and wanted to see me. I went with all my family elders to see a spacious hall, with Nananon seated, looking very majestic. I saw the month old newly installed Queenmother of Biadian, dressed appropriately, I saw the Akwamuhene of Biadan and acting Biadanhene, I saw the Gyaasehene and several others, looking extremely formal as possible.

The agenda was brief: let us agree on the date for the funeral before we go out to “train” Wofa Yaw. After consultations we agreed on Saturday 4th September, 2021, then we left.

After setting down at the funeral grounds, five minutes later, the majestic troop of Biadan Traditional Council arrived, several umbrellas in attendance and then the “Wofa Yaw Train” began.

Reader, a linguist from the Traditional Council walked about 50 meters to the microphone and announced that Nananon were ready to hear the message from “Sumankwahene”.

(Reader, I confess I don't know who is SUMANKWAHENE” – who is he?)

I saw a delegation of about five elders, one of them with some leaves in his mouth, they appeared at the funeral grounds and greeted us and went to the microphone.

Then the linguist come to tell me: Head of Family, Sumakwahene wants “lorry fare” (paid) then he came back “he wants the fee to remove the leaves from his mouth (1 paid) then he wants this, he wants that……ohoo!!!!!

At long last, he announced a long message, how Wofa Yaw, Nifahene, fell sick on 21st March 2021, was rushed to Kumasi Komfo Anokye Teaching Hospital, surgery, recovery, this, that, and so on, until finally a few minutes ago doctors say “Nana has gone to the village……”

Immediately three gunshots were released into the air and a group of women with their hands on their heads started wailing, walking round the funeral grounds.

It was now long past 3pm. The linguist announced to all that the final journey of Nana to the village would take place on Saturday 4th September 2021 and with that Biadan Traditional Council rose up, en masse to process out of the funeral grounds.

The Wofa Yaw Train was over