By Mathilde BELLENGER with Jitendra JOSHI in Falmouth 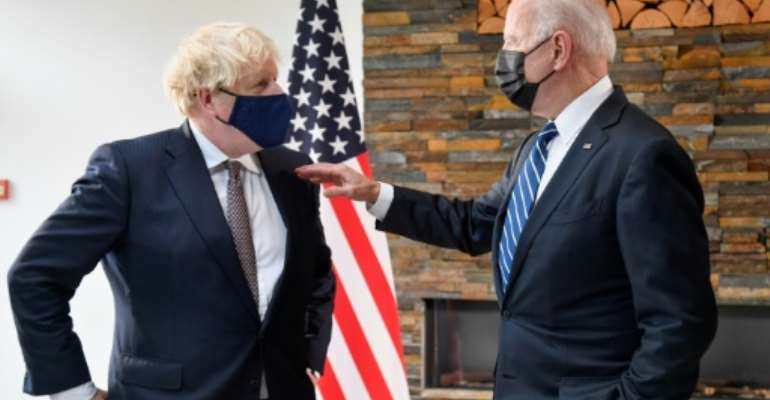 British PM Boris Johnson (L) spoke of the 'indestructible relationship' between the UK and US as he hosted President Joe Biden (R). By TOBY MELVILLE (POOL/AFP)

G7 leaders meet on Friday for their first in-person talks in nearly two years, with an expected pledge to donate one billion Covid vaccine doses to the world's poorest countries, as part of a show of Western democratic unity against the planet's most pressing issues.

The club of leading economies -- Canada, France, Germany, Italy, Japan, the UK and United States -- say a joint approach is the world's best chance for recovering from the global health crisis, and tackling climate change.

President Joe Biden set the tone on Wednesday, ditching Donald Trump's isolationist stance on global affairs to ram home a message of resolve by the G7 and NATO against both Beijing and Moscow as he heads on to his first sit-down with Russian President Vladimir Putin next week in Geneva.

"The driving animating purpose of this G7 summit is to show that democracy can deliver against the biggest challenges we're facing in the world," a senior US administration official said.

A sand drawing of the G7 leaders in Cornwall by activists who called on nations to 'share the vaccine and waive the patents'. By Ben STANSALL (AFP)

Campaigners say the G7's inoculations pledge for this year and next -- including 500 million US doses -- is far too little, too late to end a pandemic that has claimed over 3.7 million lives worldwide.

"If the best G7 leaders can manage is to donate one billion vaccine doses then this summit will have been a failure," Oxfam said, insisting the world needs 11 billion doses instead.

But the G7 has recognised it needs to mobilise against the "vaccine diplomacy" launched by the rollout of Chinese and Russian jabs, with the Biden administration stressing it expects nothing in return.

The leaders, meeting at the seaside resort of Carbis Bay in Cornwall, southwest England, are also expected to outline more help for developing nations to build up infrastructure, as a counterpoint to the debt-fuelled spending by China in Africa, Asia and Latin America.

The initiative "will embrace a high standards, transparent, climate friendly, non-corrupt mechanism" for infrastructure investment in the developing world, the US official said.

"It will be an alternative to that which other countries, including China, are offering."

Johnson dislikes the decades-old phrase "special relationship", arguing it makes Britain look subservient to Washington, telling the BBC instead that it should be viewed as "indestructible".

He also played down any differences with Biden over Northern Ireland, ahead of showdown talks between the prime minister and EU chiefs on Saturday to tackle deep fissures opened up by Brexit.

Raab told Sky News that "change must come from the European Commission side" and that "we are not negotiating or haggling the integrity of the United Kingdom".

Late Thursday, more than 3,000 pro-UK loyalists staged a protest in Belfast against the "protocol" that effectively keeps Northern Ireland in the EU customs union and single market.

Johnson will be hoping to lighten the mood at a beach barbecue on Saturday, joined by his new wife Carrie and other G7 spouses, with a sea shanty band and toasted marshmallows around fire pits.

Johnson (2R) and his wife Carrie Johnson (R) met with Biden and US First Lady Jill Biden in Cornwall on Thursday. By Brendan SMIALOWSKI (AFP)

That will follow a reception for the G7 leaders on Friday evening hosted by Queen Elizabeth II at Cornwall's Eden Project, an exhibition that showcases the world's ecological riches.

Safeguarding global biodiversity is another G7 theme this weekend, with the leaders set on agreement to protect at least 30 percent of the world's land and oceans by 2030.

They will also debate aiding poorer nations to transition out of fossil fuels, in the buildup to the UN's COP26 summit in November in Scotland.

Like the G7, Britain wants COP26 to be held in person, and announced that it plans to offer vaccine doses to delegates from poorer nations if they cannot get them otherwise.

The G7 is also expected to adopt a UK plan to ensure schooling for another 40 million girls by 2025, after the pandemic destroyed educational opportunities for many around the world.

The G7 chiefs will be joined over the weekend by the leaders of Australia, South Africa, South Korea, the United Nations and European Union, with India joining remotely.

"This is a compelling agenda for global recovery, ambitious yet achievable, provided we summon the will and the ingenuity," Johnson said.

"Britain is privileged to chair the G7 and to play our part, alongside our kindred democracies, in setting this immense effort in train. The scale of the challenge demands no less."