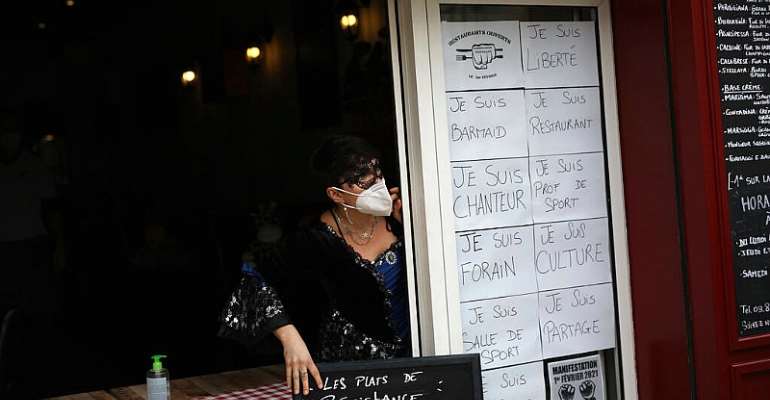 French insurance giant Axa has given in to pressure from restaurants fighting to get at least part of their lost revenue due to Covid lockdowns covered by their policies. On Thursday, it announced it would pay out 300 million euros to some 15,000 restaurants.

The agreement comes as Axa has faced several lawsuits from restaurant owners saying the insurer is trying to back out of its contractual obligations, putting their livelihoods at risk.

Most of the lawsuits so far have been successful.
"I'm sorry about all that has happened, because we were at odds with restaurants over a misunderstanding," Axa's chief executive Thomas Buberl told Europe 1 radio, noting that some appeals courts rulings had been in Axa's favour.

"We're offering a settlement to lots of people who haven't asked for anything, even those who have lost in court will be able to be part of it," he said.

Restaurants were allowed to start serving customers indoors on Wednesday for the first time since October, as France emerges from a third coronavirus lockdown.

The government has unlocked billions of euros in aid for restaurants and other businesses forced to close in a bid to slow contagion rates.

But industry officials say thousands of eateries are facing huge debt piles and the prospect of limited revenues in the months to come since capacity levels remain capped at 50 percent for now.

Axa's clients sought relief via their policies that covered "administrative closures" for a variety of reasons, including health shutdowns.

Axa refused, citing a clause specifying that any shutdown had to apply only to the individual restaurant covered, which excluded closures due to a generalised health emergency.

The company says some 1,500 suits have been filed, the first by the Parisian restaurateur Stephane Manigold, who obtained 70,000 euros in May 2020 to cover losses at his Michelin two-star Maison Rostang and three other restaurants.

"This response is not compensation, it's a transaction," Buberl added. "We want to accompany our restaurant clients during this reopening period, and it's important to put this difficulty behind us."