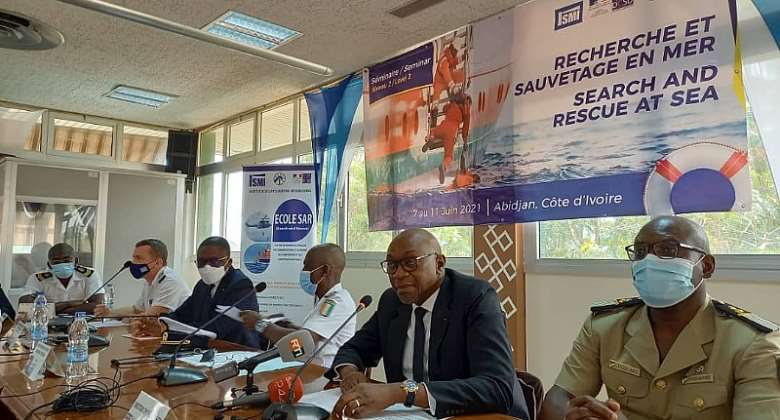 The Interregional Maritime Safety Institute (ISMI) of the Regional Academy of Sciences and Techniques of the Sea (ARSTM) on Monday, June 7, 2021, officially opened the Search and Rescue (SAR) School and commenced the level 2 training on search and rescue at sea.

Amidst the challenges facing the Gulf of Guinea, ISMI in the past years has been working on finding appropriate responses from the coastal States.

With reference to the case of the Kenya Airways accident on January 30, 2000 off Abidjan, the JOOLA in Senegal in 2002, and more recently in September 2020 with the sinking of 45 migrants off Libya, ISMI with supports from French Cooperation is organising a week-long training for representatives from countries in the region.

The level 2 training on search and rescue at sea which started on Monday is expected to end on Friday, June 11, 2021.

At the opening ceremony presided over by Director-General of Maritime and Port Affairs (DGAMP), Colonel Julien Kouassi congratulated the Director of ISMI, Lt. Col. ABE Lazare for continually working to make the institute a Center of Excellence for sub-regional maritime training.

Noting that maritime disasters have shown the inadequacy of administrations in terms of effective maritime search and rescue, the Director-General of DGAMP added that the launch of the school will also support the Ivorian Government which for a number of years has undertaken several reforms for the promotion of a dynamic Blue Economy.

“As Director-General of Maritime and Port Affairs, I am committed to supporting this project with all the means at my disposal to help it mature,” Colonel Julien Kouassi further stressed.

Taking his turn to speak at the ceremony, French Cooperation Regional Coordinator for State Action at Sea (Gulf of Guinea), Guillaume TURQUET de BEAUREGARD said it will be unacceptable for ships to call for help for rescue of any kind for a State to fail to provide the needed aid especially in the age of modern technology and communication.

He said while sea rescue cannot be improvised, it requires technical know-how and a lot of training.

“To do so, it is important to acquire theoretical knowledge (international and national regulations, procedures, maritime English, marine meteorology, knowledge of the area, etc.), and practical know-how (use of nautical charts, use of life rafts, use of communication means),” Guillaume TURQUET de BEAUREGARD added.

Applauding the support of the Ivorian State in organising the level 2 training, the Chief Maritime Affairs Officer noted that, it is important for trainees to be followed and monitored over time in order to be provided the needed help to improve their skills.

On his part, The Permanent Secretary of the Interministerial Committee in charge of State Action at Sea ( SEPCIM ) of Côte d'Ivoire, Mr. Abroulaye Fofana said the opening of SAR School is therefore timely to address the shortcomings in research and maritime rescue of human resources responsible for the said task in the Gulf of Guinea.

As the President of the Strategic Committee of ISMI, he assured that they will ensure there is supervision and improved collaboration with partners of ISMI so that the school becomes a reference school in SAR, not only for the SAR areas of responsibility of the Gulf of Guinea, but also for those of East and North Africa.

Calling on all stakeholders to continue to invest so that the school achieves excellence for the development of the maritime economy in the Gulf of Guinea, Mr. Abroulaye Fofana also expressed appreciation to France, for its exceptional contribution to ISMI through the Directorate for Security and Defense Cooperation of the French Ministry of Foreign Affairs.

The ongoing level 2 training has thirty-four participants from 17 countries of the Gulf of Guinea in attendance.