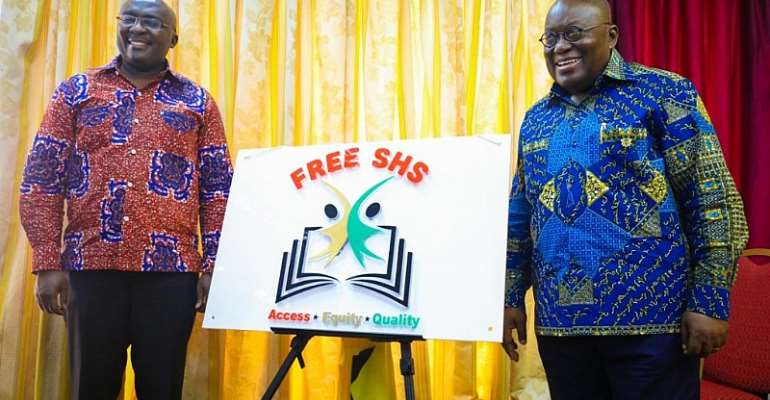 That President Akufo-Addo, by the implementation of the Free Senior High School Policy (since 2017), has carved a remarkable niche for himself in the pantheon of world leaders and heroes cannot be gainsaid. Thus, he has acted in consonance with the contemporary dictates and tenets of development and none of us avid watchers and readers is oblivious of the benefits the implementation of such a policy comes with.

Indeed, except for a few members of the opposition-NDC, almost every political figure who plays any active role in the party has been found criticising the policy. It is, also, not without credence to note that members of the NDC have vociferously chastised any initiative by the ruling NPP government, regardless of how beneficial it would be for Ghanaians. But it is equally not untrue for one to consciously observe that some initiatives by the NPP have come with the disastrous denouement, a situation which has provided the opposition party adequate cognitive grist to propagate and cement the fact that not everything by the NPP is good.

And when the NDC running mate for President Mahama in the 2020 elections, Professor Jane Naana Opoku-Agyemeng, chastised the policy on grounds of widespread cheating in the 2020 WAEC examination (See: “Ghana topped WAEC from 2012 to 2016 – Naana Opoku-Agyemang”, ghanaweb.com – Monday 7 June, 2021), emotionally pummelling President Akufo-Addo to pulp as the originator of the Free SHS Policy, a lot of us deemed it malicious lies, engineered to tarnish the ruling party and score some cheap “political points”. And we expected the ruling NPP to promptly issue a strongly worded condemnatory statement demanding immediate retraction, duly followed by an unqualified apology from Professor Opoku-Agyemang, as a benign move to safeguard the dignity and efficacy of the policy.

Was she honest with herself, Professor Jane rather would have vehemently lauded Nana Addo for formulating and implementing a policy everybody is benefiting from, including the poor in the country. And I am yet to hear any member of the opposition-NDC express concern about such morally and politically impolitic proclamation, a testament to the fact that they are all in support of the Professor’s downright repugnant swipe at the flagship policy. Surely, the policy is for all Ghanaians, regardless of political inclinations.

Then also, I find it rather quixotic that the NPP which introduced the policy does not defend it as they should. Each time people take a swipe at the policy, all we get is a lamely worded release of denial. What they need to do is to pooh-pooh such claims as abject preposterous and unconscionable falsehood. In other words, the party should cavalierly provide a release admonishing the general public to refrain from giving credence to such claims. Clearly, such a vintage response of a serious political operative is required to safeguard such a beneficial policy.

In no sense mercurial, Ghana, our country, is at a transition, where the implementation of such policies is required. That is, if we are serious about achieving development, we should desist from egregiously and erroneously criticising policies, just because of our ignobly parochial interest. The crux of the matter is that regardless of all the pejorative epithets detractors associate with the policy, the ruling party members have a duty to defend and safeguard it at all times, if they really want Ghanaians to benefit from it and take them seriously.