For many evacuees of DR Congo volcano, an uncertain future 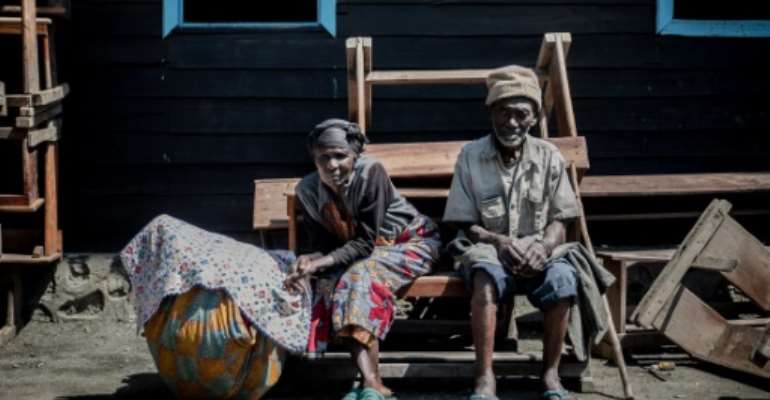 Going back: Two elderly people who fled Goma wait with their possessions for the ride home. By GUERCHOM NDEBO (AFP)

DR Congo's authorities have approved a "progressive return" to the city of Goma after the nearby volcano Nyiragongo quietened down, but many evacuees say their future there is bleak.

Thousands are homeless after Africa's most active volcano kicked back into life on May 22, spewing a river of lava that stopped at the city's fringe.

"Even if I go back to Goma, where am I going to sleep?" asked Beatrice Assumani, a mother of four who had tears in her eyes.

"All my belongings have been reduced to ash."

Assumani's home lies in the northern Goma district of Buhene, which was overwhelmed by the molten rock.

After the one-day eruption, Goma -- just 12 kilometres (nine miles) from Nyiragongo -- was shaken for several days by powerful tremors.

The main evacuation pathways from Goma. By Patricio ARANA (AFP)

As scientists warned of a potentially catastrophic blast underneath Lake Kivu, the authorities on May 27 ordered 400,000 of Goma's 600,000 residents to head to safety.

More than a quarter went to Sake, about 25 kilometres (16 miles) west of Goma.

Aid groups sounded the alarm about cholera and other risks as the town's population of 65,000 nearly tripled, overwhelming access to clean water and sanitation.

On Monday, Prime Minister Jean-Michel Sama Lukonde announced there would be a "progressive return" to Goma, although thousands of people have already informally made their way back home.

The authorities laid on dozens of buses and trucks to help displaced people return. By GUERCHOM NDEBO (AFP)

"Areas that have been ravaged by the volcano should no longer be occupied by the public," he said.

"We should draw the lessons of the 2002 and 2021 eruptions to ensure that people are never again placed so close to danger."

Around 100 people died in the January 2002 eruption, which smothered swathes of eastern Goma and half of the airport's runway with lava.

On Wednesday morning, a convoy of 34 buses and a dozen trucks headed to Sake to bring some of the evacuees back.

"It's good to go back to Goma, but where can we sleep and what do we eat?" asked Esperance Leonard, also from Buhene.

"Even when we were here (in Sake), we didn't get any help. How are we going to survive?"

Valentine Kazingufu, second right, moves in with her family into in her brother's home in Goma's Majengo. By GUERCHOM NDEBO (AFP)

But one of them, Emergence Musimwa Muhugule, said she had not received the slightest support while in Sake.

"I am angry. We fled but I got no help, neither a plastic sheet nor rice, not even beans. I've lost everything -- how can I get my old life back?"

On Wednesday, a local administrator was arrested for embezzling food aid supposed to be given to people displaced by the eruption, a spokesman for the North Kivu region's military governor said.

Others were worried that their homes would be looted in their absence.

"What will we be coming back to? I fled leaving the door unlocked," said Bahati Shirungu, a resident of Mabanga district.

Returning to Goma with the convoy, Valentine Kazingufu, a mother of five, headed for the district of Majengo, where the edge of the lava flow stopped just a few metres (yards) away.

"Before the volcano erupted, I lived in a house, but now I have nothing," she said.

"I am going to be living with my older brother -- there's going to 15 people squeezed in there. I don't know how we are going to manage to eat and sleep.

"We urge the government and aid groups to intervene."

Between 900 and 2,500 dwellings have been destroyed, according to various estimates, which if extrapolated could mean around 5,000 people are homeless.

Thirty-two people died from lava burns or asphyxiation, and two more died in accidents during the exodus.