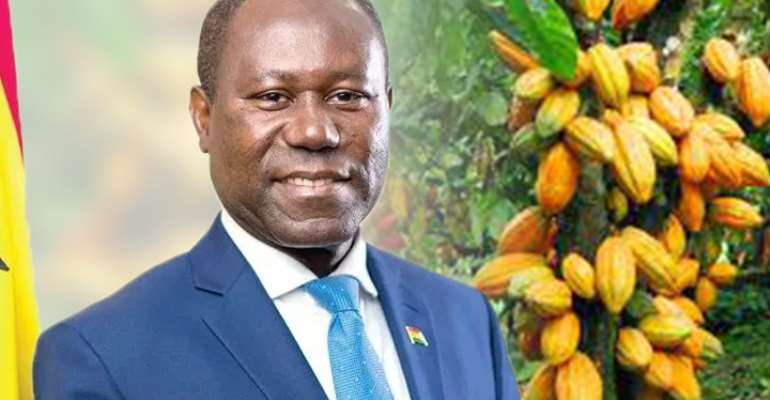 The cocoa sector, for many years, has become the backbone or support for our exchange rate stability. The government, through COCOBOD every year issues a syndicated loan between US$1 billion and US$1.5 billion, purposely for the forward sale of cocoa for a particular crop season. This has curbed the seasonal sharp depreciation of the cedi, improved our balance of payment as well as the reserve position of the country.

Unfortunately, more than half of the producers of cocoa live below the poverty line with a monthly wage of less than GHC150 or US$400 per acre for a year compare to other cash crops. This has compelled cocoa farmers to easily give out their coca farmlands for illegal mining in the country, as this provides non-sustainable cash up-front to these farmers.

A statement issued by Chamber for District and Community Industry, (CDCI) and signed by the Convener, Solomon Kattah has said.

Solomon Kattah indicated that the cocoa farmers are earning below the minimum wage, which is posing as a threat to the industry and has deterred most of our youths into such venture culminating in the collapse of the citrus industry. "With this, how can we eliminate child labour in the cocoa sector, and how can the farmer survive?"

He added, "Moreover, the work of our illegal miners in the country has depleted the country’s forest reserves, as well as polluted our soil in most cocoa growing areas.

"Other cash crops across some African countries like Uganda, Tanzania, as well as Kenya who cultivates avocado, coconut, ginger, pineapple among others earn above US$2000 per acre annually.

“The government of Ghana is aware that the economic and social development of the country depends on improving the living and working conditions of producers for which per our LID introduced by the government is a step in the right direction. But the yield per hectarage is woefully inadequate.

"Cocobod with its large farmer data base and hectareage in the cocoa sector can introduce alternative cash inter crops as mentioned above. Which has improve the farmer income to about 500 percent. It has also increased net earnings above US$5billion."

He stressed that COCOBOD as an organization would be more resilient as it partners with these sectors and large private participation within the next five to ten years.

In this light, he noted that this would drastically improve the country's Gross Domestic Product, help stabilise the cedi for a longer period while processing industry emerging out of them could create sustainable jobs for between 80,000 and 100,000 people and indirectly create over 400,000 jobs.

“On cocoa roads, this would go a long way to increase government revenue set aside towards cocoa roads."

In our quest, Solomon Kattah indicated that COCOBOD and government should consider these key prepositions and also put in place strategies and programs with private capital injection (long term) and participation to help cocoa farmers take advantage of the AfCFTA.

"The cocoa sector could support the structural transformation of the country and thus promote greater economic and social inclusion for a more harmonious development. If the industry was lucrative, galamsey could not have happened which has destroyed our forest reserves and water bodies."

He continued, "COCOBOD should realize that over the years, cocoa alone have not been able to improve the livelihood of the farmers and therefore should consider institutional diversification. Upon all the effort the government has put in place to introduce the LID, it is still less profitable compare to a lot of cash crops.

"COCOBOD should be innovative by creating multiple cash crop platforms because the age bracket for most of these cocoa farmers are rising, also, the yield per acre which is US$400 without cost of inputs is unattractive."

Solomon Kattah emphasised, "But the sad story for these cocoa farmers could change if Cocobod decides to introduce land utilization program for the farmers and also increasing environmental safeguards.

"The government has done what it can. Cocobod has no control over what’s happening right now, no matter what they do in their old lifestyle will not help, until they introduce the per acre land utilization and at the same time making sure that everything they do meets environmental standard

"Cocobod in the past has lacked to give economic incentives to farmers to behave as entrepreneurs, but they did protect the farmers from price-fluctuations by offering stable prices, introduced subsidized input schemes (paid by FoB margin) and made sure the quality of the exported cocoa was high. The advantage of this system is stable prices and cocoa farmers in Ghana are relatively well-off, but on the downside there are many inefficiencies due to the fact that a public entity is running a private business.

"The cocoa sector is failing us and if care is not taken it would have dire consequences on the farmers, the government and the economy as a whole. The government needs to take drastic measures to protect the industry by channelling more resources into the sector to make it an attractive venture.

"To sustain the economy going forward, the government needs to investment massively in other cash crops such as coconut, avocado, water melon etc which falls under the same climatic conditions with cocoa on a large scale basis. This would help supplement the loss foreign exchange that the country may experience in the near future."