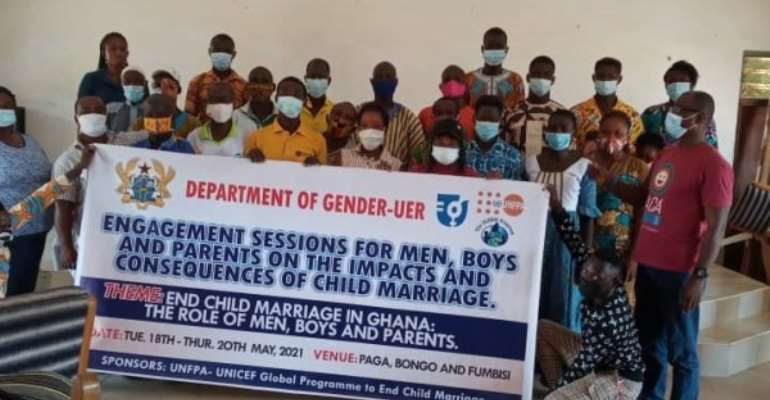 Mrs Georgina Aberese-Ako, the Upper East Acting Regional Director of the Department of Children, says transactional sex is one of the leading causes of teenage pregnancy and child marriage in the region.

She said the phenomenon was becoming more predominant in the region which needed serious and urgent attention from all stakeholders to help address the situation for proper youth development and growth.

Mrs Aberese-Ako made this known to stakeholders at separate functions in three districts, Builsa South, Bongo and Kassena-Nankana West Districts, as part of the implementation of the Adolescent Sexual and Reproductive Health and Rights Project.

It was being implemented by the Regional Directorate of the Department of Gender with funding support from the United Nations Population Fund (UNFPA) with the objective of equipping men, boys and parents with knowledge on adolescent sexual and reproductive health and rights, to enable them to join the fight against teenage pregnancy and child marriage.

“There are even some instances where some parents encourage their daughters who are in school to go into transactional sex to help them make a living. Once such girls become pregnant, they are forced into marriage by their parents thereby truncating their education and future carrier”, the Director stressed.

She said men, boys and parents were needed to address the problem and called on them to become ambassadors and advocates in their respective communities to help reduce the canker.

The participants at the separate forums attributed the cause of child marriage to broken homes, the inability of some parents to provide the basic needs of their children and lack of Sexual Reproductive Health Education on the part of both portents and the adolescents.

The stakeholders said child marriage often affected the development of the girl child, unintended pregnancy and barriers on the adolescent and underpin their personal health, educational opportunities and inability to participate in public life.

They added that apart from many of the victims contracting Sexually Transmitted Diseases, HIVAIDS, majority of them dropped out of school.

On the way forward, the participants gave the assurance that they would work with Traditional and Religious leaders to reform certain cultural practices that are harmful and contribute to reducing child marriage and teenage pregnancy.

They indicated that they would collaborate and support the law enforcement agencies to ensure that perpetrators of child marriage were dealt with drastically to serve as a deterrent to others.

Pognab Sofaya Ayarick, the Queen Mother of Gbedema in the Builsa South District, entreated parents to ensure that they provided the basic needs of the girl-child particularly menstrual pads to prevent them from relying on men for assistance.

Mr James Twene, the Upper East Regional Director of the Department of Gender, impressed upon stakeholders to strengthen their advocacy platforms and to intensify their sensitization programmes on child marriage to help mitigate the problem.