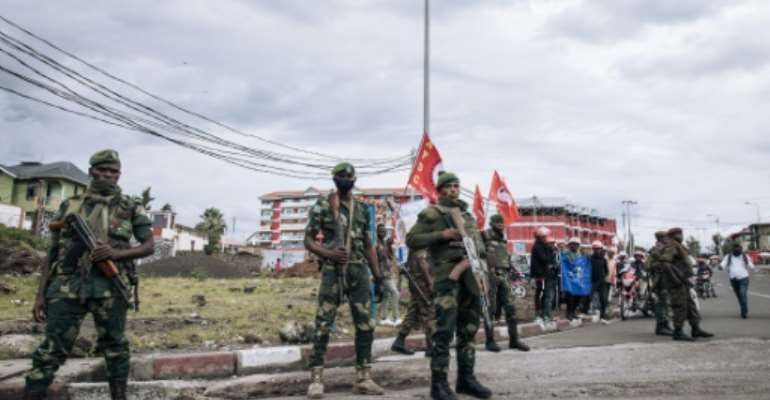 DR Congo's army has failed to bring the many armed groups in the country's east to heel. By ALEXIS HUGUET (AFP/File)

A hospital in troubled eastern DR Congo was looted and torched during fighting between government forces and an armed group, an aid group and local officials said on Tuesday.

The general hospital in Boga in Ituri province was "deliberately targeted in a brutal attack" on Monday, said Doctors Without Borders (MSF), which supports the facility.

The hospital was "the last structure in the area which provided treatment to people," it said in a statement.

The pharmacy and medical store were looted, the intensive care unit burned down and other buildings were pillaged, it said.

MSF said it knew "little" about the attackers or why they targeted the hospital.

But the army blamed a notorious militia, the Allied Democratic Forces (ADF), which on May 31 slaughtered 57 people in the area.

Nine children who were being treated in the paediatric service and two adult patients are awaiting transfer to another hospital, MSF said.

Kabimba Zitono, head of the Rubingo administrative area, said at least four civilians were killed, and that the church in Boga as well as the hospital had been burned.

The unidentified attackers are believed to have holed up in a neighbouring village, he told AFP.

The army said the ADF, which has been blamed for massacring hundreds of people this year, set the hospital ablaze while retreating from government troops.

A historically Ugandan Islamist group that the United States links with the so-called Islamic State, the ADF is the deadliest of scores of armed militias that roam the mineral-rich eastern Democratic Republic of Congo.

MSF said the attack on the hospital "showed blatant disregard for the neutrality of hospitals and medical spaces" and urged all combatants to respect medical infrastructure and personnel.

DR Congo President Felix Tshisekedi on May 6 proclaimed a 30-day "state of siege" in Ituri and neighbouring North Kivu province to help stem the violence.

Governors and other senior officials have been replaced by army officers or police.

The measure was renewed for another 30 days by the National Assembly on Thursday.