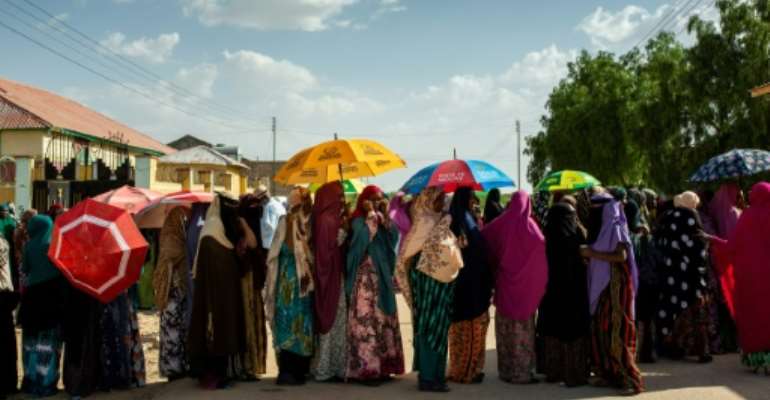 More than a million people were eligible to vote in the long-delayed elections. By Mustafa SAEED (AFP/File)

Two opposition parties in the self-declared republic of Somaliland said Sunday they had formed a coalition giving them a majority in parliament following long-delayed local and legislative elections.

The territory in the north of Somalia declared independence 30 years ago but has never achieved international recognition.

But it has a functioning government and institutions, its own currency, passport and armed forces.

In the May 31 elections, more than a million voters were eligible to cast ballots to elect 82 lawmakers and 220 local councillors in a political system limited to three parties.

According to official results, the leading opposition party, Wadani, won 31 seats in parliament, followed by the ruling party Kulmiye with 30 seats and the opposition UCID with 21.

Wadani and the UCID announced their alliance shortly after the results were announced on Sunday.

Hargeisa Ismail Adan Isman, spokesman of the new coalition, told reporters that the move was "in the interest of the unity of the people of Somaliland".

A map of Somalia locating Somaliland. By (AFP)

With a combined 52 seats, the alliance will enjoy an absolute majority in parliament.

The two parties together also won 127 local councillors -- 79 for Wadani and 48 for the UCID -- against 93 for the outgoing ruling party.

The new balance of power is expected to reduce President Muse Bihi's room for manoeuvre. The next presidential election is set for late 2022.

Somaliland's last legistative elections were in 2005, and the May 31 vote had been postponed several times.

Somaliland, formerly British Somalia, fused with the former Italian Somalia at independence in 1960. It seceded unilaterally in 1991 after the fall of the dictator Siad Barre, which plunged the country into clan-based fighting.