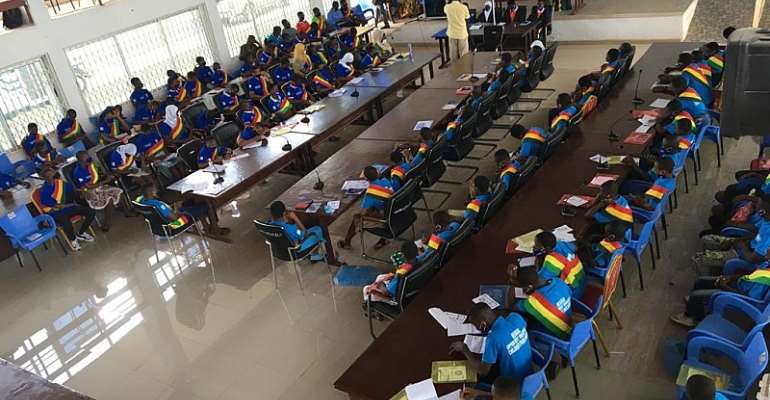 The inauguration was in collaboration with the Upper West Regional Department of Children with funding support from Plan International, Ghana.

About 120 children, who constituted the House, were drawn from all eleven districts in the region.

Ms Muhasinah Yelimaala Ibrahim, Minority Leader of the Children Parliament, in a submission on the floor, said the uncontrolled use of mobile phone by teenagers is a contributing cause of teenage pregnancy.

She said some teenagers had the luxury of mobile phones and were present on almost all forms of social media, without parental guidance, and called on parents and guidance to ensure their teenage girls use mobile responsibly, especially for academic purposes.

A speech read on behalf of Dr. Hafiz Bin Salih, the Upper West Regional Minister, who was the guest of honour at the event, stressed the need for children to be nurtured to enable them to contribute meaningfully the national development discuss, particularly in relation to issues that bordered on their lives.

He said in spite of the potentials of children contribute towards national development, they were faced with many challenges such as teenage pregnancy, child marriage and child labour among others, and called for concerted efforts to address those menaces.

“Children are valuable resources that must be harnessed for national development. Issues that affect the well-being of children should be debated on the floor of the House to heighten the issues for policy makers and the authorities in charge to take actions to address them”, Dr. Sallih said.

The Minister also encouraged the members to work as a team which would help strengthen the House and make it a vibrant voice for children in the region and the nation at large.

He advised the children to perform responsibilities expected of them by their parents and those in authority such as taking their studies very seriously, showing love and respect to others and supporting their parents by performing house chores.

Mr Mohammed Sidick Tambognaa, a retired educationist, advised the children to develop themselves not only to be useful to their families but also to the country.

He also encouraged the children not to see money or wealth as their motivation in whatever they were doing, but to focus on their personal development and service to others.

“In Ghana, we don’t really have selfless leaders, we have selfish leaders and that is why we are where we are today. While you are in Children Parliament you also have to take your studies very seriously and imbibe honesty in you”, Mr Tambognaa admonished.

I dare confused, boastful Shatta Wale for a battle at stadiu...
59 minutes ago