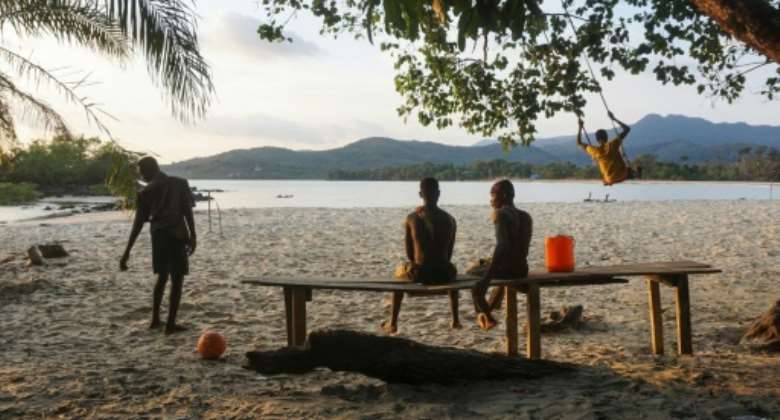 Sierra Leoneans are protesting a planned industrial harbour in a lush village in the West African country over concerns the Chinese-financed project will destroy pristine rainforest and pollute the ocean.

A nearby turquoise lagoon overhung with palm trees is also a seasonal breeding ground for fish and turtles.

But last month the government announced plans to build a fishing harbour and processing complex in the village, sparking fears that the tropical idyll is under threat.

Citing the potential for thousands of new jobs in the poverty-stricken nation, the fisheries ministry said China is funding the $55-million (45mn-euro) project.

Tommy Gbandewa, a dreadlocked eco-lodge owner who goes by the name 'Tito', is leading resistance to the plan -- on green grounds.

"If the Chinese come here, the environment will be stinking. The beaches will be smelling," he said.

The controversy cuts to the heart of tensions between development and conservation in Sierra Leone, and comes as the government is also seeking to promote eco-tourism to boost its economy.

Sierra Leone, a diamond-rich former British colony, is one of the world's poorest countries and is still recovering nearly two decades after the end of a civil war which claimed some 120,000 lives.

Sierra Leone has rich fishing grounds, but few locals are able to exploit the resource, according to the fisheries ministry, which last month said that about 140 foreign trawlers catch most of the country's fish.

The trawlers then process and sell it abroad "with little or no benefit to Sierra Leone".

The planned harbour is intended to siphon some of the profits towards locals.

Wudie Bakie Koroma, spokesman for the artisanal fishermen's union, said he was in favour of the harbour in general.

But he said: "If a fish meal (factory) is part of the project, we will not support it".

Du Zijun, a Chinese diplomat in Freetown, said in a statement that the plan is to build a harbour rather than a "fish meat mill".

"The accusations of not paying attention to environmental protection and destroying the ecological environment are completely sensational and hypothetical," he added.

Sierra Leone's President Julius Maada Bio is banking on the country's abundant wildlife and rainforests to rekindle the tourist industry.

Locals have launched online petitions to reverse the government decision, and drawn attention from local press.

Tito told AFP that the discontent was widespread. Government officials had turned up accompanied by armed men to survey properties, he said, adding that he didn't want to forfeit his plot.

"I'm Sierra Leonean and I have a right to the land," Tito said.

Many residents of Black Johnson village are against the planned industrial harbour in their lush village. By Saidu BAH (AFP)

Fisheries Minister Emma Kowa Jalloh, during a recent visit to Black Johnson, promised that landowners would be compensated.

"We are not grabbing land," she said, adding that the project was "dearly needed" and would create jobs.

Green Scenery, a local environmental NGO, has accused the government of not carrying out environmental due diligence, however, and has urged it to cancel the project.

"Black Johnson is the only eco-tourism destination left within Freetown, we need to protect it," said the group's executive director, Joseph Rahall.

Not all locals are averse to the harbour plan, however.

He explained that much of the friction with the government had come from a lack of dialogue.

"We are calling for a peaceful resolution of the matter, so that everybody will come out as a winner," he said.