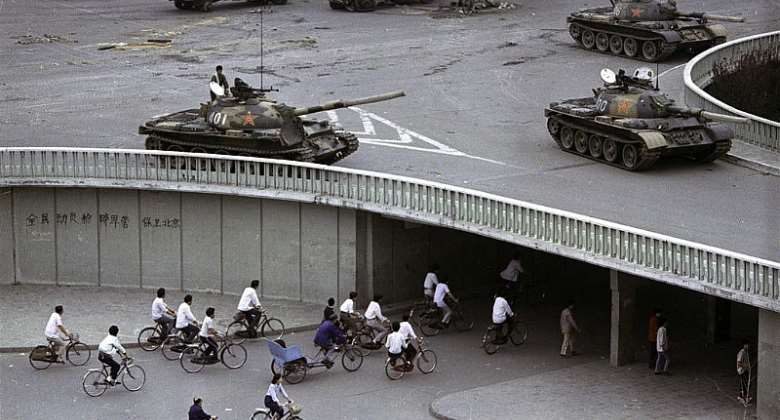 After China sent in troops and tanks to violently suppress protests at Tiananmen Square on the nights of 3-4 June 1989, Beijing has suppressed any discussion about the tragedy that cost the lives of hundreds, possibly thousands of people. Today, people in Hong Kong find themselves silenced too.

Since 1989, the semi-autonomous territories of Hong Kong and Macao were the last places on Chinese soil allowed to publicly mark the events of 4 June 1989, when the People's Liberation Army opened fire on student-led protesters in a crackdown that left hundreds, if not thousands, dead.

Last year, authorities banned the vigil, citing health concerns as the Covid-19 virus was raging. Hong Kong police stressed in a "clarification" that  the decision to ban the rally was taken "to protect the health of the general public, not to suppress the freedom of assembly of Hong Kong people".

But since Beijing has embedded its "National Security Law" in Hong Kong's legislation and started rounding up critics of the politics of China's Communist Party (CCP), the message is clear.

"The regime has become more and more authoritarian under Xi Jinping, and we can see that broader and broader sections of the society have been impacted by this repression," sinologist Marie Holzman, president of Chine Solidaire, a Paris-based human rights NGO, told RFI.

"The way China has taken power in Hong Kong in such a short time, and with such violence has taken us all aback."

The "June 4 Museum", that was created in 2012 by the Hong Kong Alliance in Support of Patriotic Democratic Movements of China and which was solely dedicated to the massacre, suddenly closed, two days before Friday's anniversary.

A notice on its website said that after inspections, authorities claimed the museum did not have the right licences and "was suspected to have violated the 'Places of Public Entertainment Ordinance'".

​​​​​​"It is what is inside the museum that worries me," says Holzman. "I'm very worried that the authorities would like to steal all of it." One of the most precious items in the June 4 Museum is a bullet, taken out of the thigh of Zhang Jian, who was shot at the square in that night.

After the massacre, Zhang fled to Europe as a political refugee and obtained French citizenship. "We convinced him to have the bullet taken out of his thigh because he was wounded during the events of Tiananmen," says Holzman.

"Right from the beginning, Zhang said: 'I want this bullet to be put in a museum in memory of Tiananmen.' So it has been there with an explanation that it came directly from Tiananmen via Paris, and from the thigh of Zhang Jian. Zhang was an eyewitness, and with his shot wounds nobody could say to him, nothing happened on Tiananmen Square."

But Zhang Jian died in 2019. "So, losing that bullet for us means an awful lot.

"The Chinese government just wants to say that nothing happened in Tiananmen Square. So if they manage to erase all traces of what happened then in a few years, people will say, 'We never heard of Tiananmen,'" she says.

While in Hong Kong people see their chances of commemorating the event drastically reduced, in mainland China any hint of dissent will be dealt with brutally, says Holzman, while any reference to the episode is written away in the official annals as a "counter-revolutionary rebellion" instigated by a "small handful of ruffians".

Thanks to its suppression, stability was restored, and, according to Beijing's propaganda, that laid the groundwork for China's current economic success.

"Almost until last year, there were people who tried to commemorate in a very discreet way," like putting discreet stickers like '64liquor' on wine bottles ('64' referring to the 4th of June, the 6th month), or actions like the one by dissident Jiang Qicheng, who called on people to light candles and who was jailed for four years.

"After coming out he said, 'I paid for years of lack of freedom. But I'm happy I was able to do it'," says Holzman.

But in today's China, where every citizens' movement is increasingly scrutinised by electronic surveillance devices, this is hardly possible.

"It's like in an Orwell film, you'll have a drone, or you'll have a cop coming out to prevent you from doing anything," Holzman says, adding that people who went through 1989 as students or kids "do remember, but they might talk about it together in their homes and very discreetly".