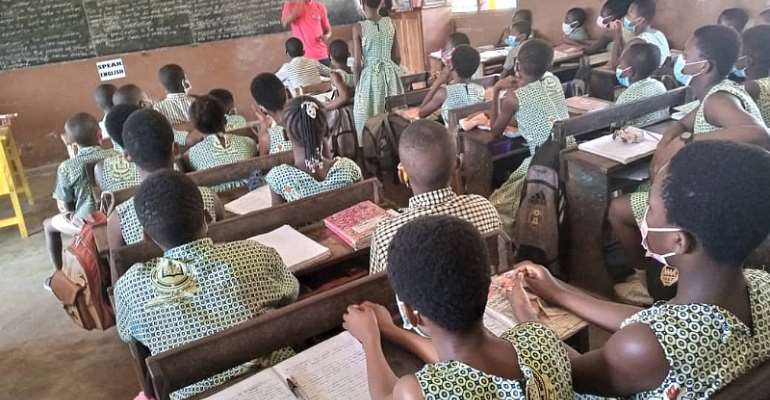 The Obuasi East District Director of NCCE Madam Jennifer Ofori has explained the purpose of this year’s edition of Citizenship week. She said the purpose of the celebration is to inculcate unto the youth and Ghanaians in general a sense of patriotism and loyalty to the state.

The NCCE Director was speaking at a Press briefing after series of Sensitization programmes at selected schools in the District to wind up this year’s edition of Citizenship week.

Touching on the theme for this year's celebration; "We are One, Ghana First", Miss Ofori said the theme was carefully chosen by NCCE to inculcate unto the Ghanaian a sense of patriotism, national unity, cohesion, loyalty to the state and hard work as a shared positive values which will engender good character development among the people.

She again revealed that this year’s Citizenship Week Celebration targeted basic schools. She added “it’s a reminder to pupils to embrace their roles and responsibilities and the role they can play to build a strong, resilient, vibrant and democratic Ghana". She called on the youth not to shirk their responsibilities in contributing their quota to the development of the country.

As enshrined in Article 35 (5) of the 1992 Constitution, Madam Jennifer Ofori again posited that the Citizenship week was carefully crafted to instill unto the youth of the country a sense of patriotism which will enable them to prioritize the interest of the country above other interests or considerations.

“It is our expectation that by the end of this program, pupils will embrace the sense of responsibility, Patriotism, hard work and a sense of unity which are needed to ensure development. This is what NCCE stands for", she stressed.

The Obuasi East NCCE visited Abusco Royals International, Independence, Bryant Mission Grammer, St. Joseph’s, Adansi High, Pomposo D.A. Primary, Kwabenakwa-Domeabra, and other schools in the District and schooled them in areas such as Patriotism, Respect for national symbols, hard work, Communal spirit ,decency and the use of decorum language.

I dare confused, boastful Shatta Wale for a battle at stadiu...
50 minutes ago