Motorbike blues: Guinea struggles to crack down on two-wheel taxis 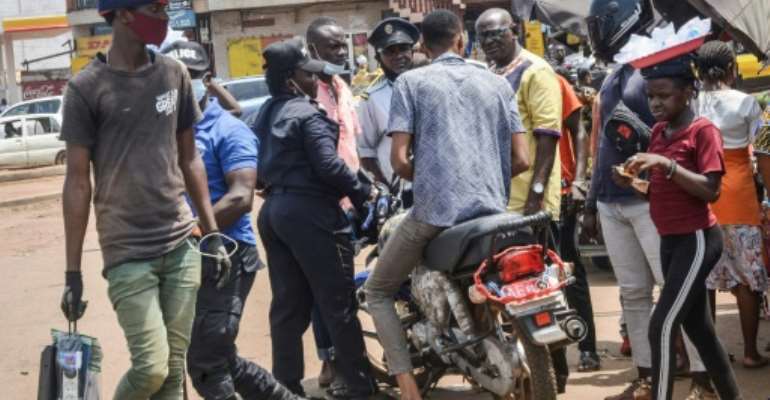 Tension is high these days on the streets of Conakry, where motorcycle taxi drivers and police are embroiled in a game of cat and mouse.

Two-wheeled taxis are essential for anyone who wants to avoid the West African capital's notorious traffic jams.

Responding to demand, many young men have committed their savings or borrowed heavily to buy a motorbike and ply informally for trade.

But police say the fast-spreading, illegal and chaotic business poses a threat to road safety and have launched a crackdown.

They have barred all motorbike taxis from Kaloum -- the most lucrative area, where ministries and other government buildings are located.

The order, announced on May 5 and effective the following day, punishes offenders with fines and even the confiscation of the motorbike itself.

Since then, motorbike taxis and police have been trying to outsmart each other -- two-wheel drivers dart into Kaloum, pick up a passenger and speed away without getting pulled over.

Not infrequently, things turn physical, when Conakry's police, who have a reputation for brutality, seize a recalcitrant driver and put the handcuffs on him.

An AFP reporter last month saw a long line of young men outside the offices of the traffic police, waiting to recover their motorbike after coughing up a fine of 200,000 Guinean francs ($20.4 / 16.7 euros) -- a huge sum in one of the poorest countries in the world.

Such punishment can have a crippling effect on young men who are already struggling with poverty and massive unemployment.

One taxi driver is Abdoul Karim Bah, a 27-year-law graduate, said, "My brother, who is a trader, supported me throughout my university studies. He bought me a motorbike and said, 'Go on, find a way to get by, like all the unemployed graduates of your age'."

But just a quarter or a fifth of that -- around $3 / 2.5 euros -- is left after the driver pays for the bike's loan or rental, fuel and other running costs.

Kick out the jams

The motorbike taxis are widely appreciated by the public.

A trip to and from Kaloum aboard a two-wheeler is not necessarily cheap.

The price can be almost triple that of a four-wheeled taxi, if one assumes that the fare in the conventional vehicle is shared among a large number of passengers.

But where the motorbikes score is in saving time -- they can nip in and out of the jams on Kaloum, located on a peninsula whose entrance is a chokepoint.

The police have a different viewpoint, saying that informal motorbike taxi drivers are a plague -- and a perilous one, too.

"(They) create chaos wherever they go," said Issa Camara, a captain with the traffic police.

"They pull over whenever they want and however they like -- it's a real problem for traffic police and other road users."

Since the start of the year, more than 100 people have died across the country in accidents involving motorbike taxis, a senior police official said.

Mamadou Bailo Tounkara, an official with the association of motorcycle taxi drivers in the district of Ratoma said that only a fraction of the city's two-wheeled taxi business are licensed.

"We have huge problems in managing and monitoring the spread of motorbike taxis in Conakry," he said.

"Anyone who has failed in life, all the unemployed graduates who have never learned to drive a motorbike, have rushed into this business -- it may generate income but it's extremely dangerous."

Members of licensed associations wear a numbered bib whose colour denotes the district where they are based -- but even these professionals have occasional run-ins with the law.

An administrative official in Kaloum said the scale of the phenomenon, as well as petty corruption, meant that it was impossible to crack down -- "even if you put a policeman on the back of every motorcycle taxi."

"I know it's banned. But there isn't any other work," said driver Mamadou Bachir Diallo, his anti-Covid mask under his chin.

"There's huge injustice," he said. "There are police who have got motorbikes and their kids go around on them, and they aren't stopped."