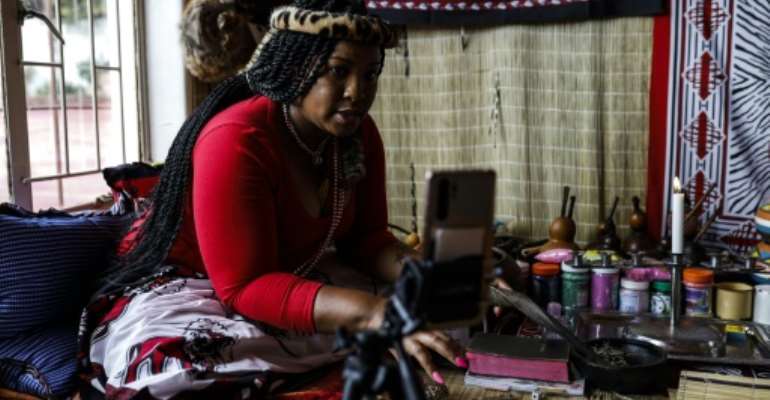 Some traditional healers now find themselves throwing bones in front of an iPhone to maintain a link to their clients. By Guillem Sartorio (AFP)

Incense burned gently in the corner of a sunlit room as South African traditional healer Makhosi Malatji fixed her smartphone into a tripod and reached for a small bag of divination bones.

A young female face on the screen watched Malatji shake the pouch and scatter its contents across the floor of her Johannesburg home.

She angled the phone to make sure her client could follow and began interpreting the bone pattern, finding cues that prompted the woman to open up about a distressing family feud.

"Before Covid I had never used a phone or laptop to do a consultation," said Malatji, who trained over a decade ago.

"It was a bit of an adjustment," she laughed, describing her first Skype session as "a mess".

A ring light stood at the back of her brightly coloured consultation room lined with traditional printed fabric and carpeted in animal skin.

Despite the easing of coronavirus restrictions, Malatji still sees half of her clients remotely.

"I actually enjoy the online ones more now because it saves time," she admitted, noting that she also acquired new overseas customers in countries like Dubai, Italy and Sri Lanka.

Known as "sangomas" in Zulu language, traditional healers are qualified herbalists, counsellors and mediators as well as diviners.

Many South Africans consult them for illnesses, dream interpretations and conflict resolution.

Shrouded in misconception, sangomas were banned in 1957 under the "Witchcraft Suppression Act" and only legally recognised decades later as "traditional health practitioners".

Knowledge transmission skipped a generation as a result, with grandparents training millenial grandchildren more inclined to break with tradition.

Five years after she became a traditional healer in 2012, Nomfundo Dhlamini branched out into the digital space as a self-proclaimed "new age sangoma".

A wide range of herbs and other ingredients are used to make sangomas' traditional remedies. By Guillem Sartorio (AFP)

A growing number of ailing customers have started discussing symptoms and remedies with her via WhatsApp message.

Previously, "the only way to speak to a traditional healer was to go to their place," Dhlamini explained. "Now there are new ways of doing things."

But the digital presence of sangomas remains limited, she added, pointing to a backlash from traditionalists opposed to modernising the practice.

There is "a little bit of tension", Dhlamini noted.

"It's not really easy for an elderly healer to ask a younger healer for help (with technology)."

Xhanti Madolo, 39, spotted an information gap about sangomas when he moved to Johannesburg from the Eastern Cape province in 2002.

"A lot of the people who move from rural to more urban areas... don't know where to consult," he explained.

"We went into a very traditional space where technology is frowned upon... thinking that people might be averse," Lindi said.

But more than 200 healers have signed up to the platform since its launch last November.

Lockdown "has been a great help", said Madolo, as "traditional healers are starting to move" online.

66-year-old sangoma Gogo Molahlegi believes that practices like bone reading must be done in person. By Guillem Sartorio (AFP)

Yet after struggling with months of telephonic consultations, 66-year-old Gogo Molahlegi was somewhat relieved when authorities allowed traditional healers to resume face-to-face sessions.

The great-grandmother still feels less constrained by face masks and hand sanitiser than a screen.

"At my age... I prefer to see someone here," Molahlegi told AFP, removing her sandals before stepping into a small back yard room lined with jars of herbs and bottles of sacred river water.

A younger trainee took notes as Molahlegi lit a candle and sniffed tobacco -- rituals that mark the start of a traditional reading.

"Throwing bones cannot change," she argued. "You cannot do that digitally... the person has to be here with you."