Knowledge Without Wisdom Is A Curse 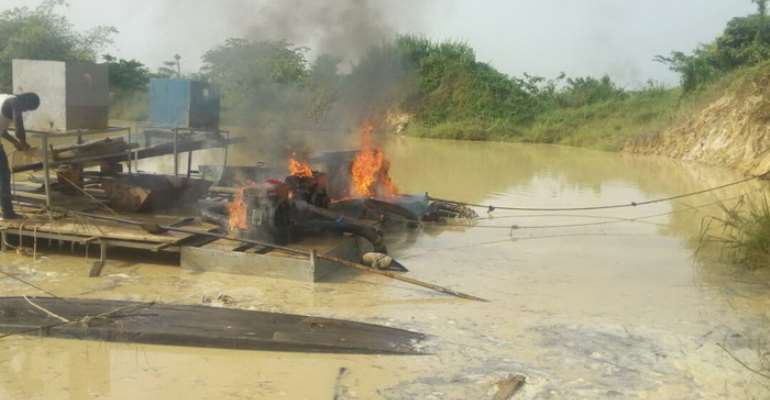 I do not blame the people who think that it is “illegal” for the Government to order soldiers engaged in “Operation Halt”, to burn the excavators, bulldozers and other equipment, seized at galamsey sites.

They seem to ignore the fact that the use of the law is essentially a political act. Yet politics has been defined as “the art of the possible”. How does that imperative get reconciled with the obligation of a Government to safeguard “the public good”?

I am afraid this dilemma has caught both the present and past Governments. The galamsey problem reared its ugly head in the late 1980s, and every Government has been forced, by the sheer ugliness of the galamsey praxis, to seek to act to curb it. But it's always been a struggle trying to balance what they recognise is a delicate socio-political problem, with the need, in their own self-interest, not to alienate those of their supporters who are engaged in galamsey.

Thus, the NPP Government has been trying to entice “small-scale miners” to adopt safe, scientifically-approved mining methods, without success. It actually adopted the clever method of paying allowances to miners to go for short-term educational courses, at the University of Mines and Technology (UMaT), Tarkwa.

Not only that – the NPP Government embarked on the granting of concessions to miners who had undergone the Tarkwa course, in the hope that they would put their newly-acquired knowledge to good use.

But the attraction of quick money brought the attempt to an ignoble end. For mainly economic reasons, many of these “new-type”, bona fide miners were seduced into selling their certificates and concession licences to financiers, who could eschew what is described as “backward, artisanal” mining methods and employ, instead, heavy-duty excavators, bulldozers and chanfangs, to make a clinical enterprise out of winning gold.

Thus, it can be said that ironically, instead of the Government's assistance to small-scale miners helping to stop galamsey, it rather enhanced it. The situation became so murky, in fact, that when a galamseyer was caught by, say, Operation Vanguard personnel, he flashed a “licence” at them! In doing that, the galamseyer would depend on the almost certain fact that the security personnel would not be able to verify his claims. They would wonder how he got the licence, in any case. Did he get it because he had political “contacts”? If that were so, would it be that wise to antagonise him?

The police would become involved. Sometimes, so would immigration personnel. Which would make a murky situation even more enigmatic. But never mind: bribery would always manage to cut the “Gordian knot.” If bribery could not be used at the galamsey site itself, the arresting officials would somehow be put in touch with “influential, Honourable, Party/Government officials”. And the impression would gain ground that the arrested galamseyer was “working with” the Government.

Under such hush-hush circumstances “prospecting” licences were transformed into active mining licences. Worse, forest reserves became mining sites. If there was no official collusion, how did excavators manage to be driven across public roads, through feeder roads, into forest reserves?

The bizarre result of all these bizarre practices has been that since the Government's elaborately-structured “OPERATION GALAMSTOP” was launched more than two years ago, our rivers, streams and water-bodies, a AS WELL AS FOOD AND COCOA FARMLANDS – have continued to be been destroyed at an alarming rate.

But despite the realities on the ground, the Government thought, once again, that words (in the form of laws, this time round) could stem the tide of the wanton destruction. So, in 2019, it announced, with great fanfare, that it had enacted Act 995, under which galamseyers and their collaborators would face long terms of imprisonment, plus other severe penalties, when caught.

But the Government had, once again, deceived itself. The mere announcement of the new severe punishments would not be enough to deter the galamseyers from carrying on with the destruction of our

invaluable water sources and farmlands. What was needed was the ruthless prosecution of galamseyers, in the full glare of media coverage. That would be done “pour encourager les autres” (“deter others”, as the French put it). Yet the Government has failed to prosecute a single person successfully under the new law, Act 995!

By April 2021, the contradictions had become so glaring that Government's patience understandably snapped. And it ordered armed forces personnel to find and burn all excavators and bulldozers found at galamsey sites, 100 metres from water-bodies and forest reserves.

However (and rather unfortunately) the Government did not include food and cocoa farmlands as part of the localities at which excavators and bulldozers would be burnt, if caught operating there. So, once again, the galamseyers were given a sort of escape route. They are continuing their destruction, but claim that it is not being done within the limits set by the Government. The answer, surely, is for the Government to BAN GALAMSEY EVERYWHERE?

The funny things is that even with its half-measures, the Government is catching serious flack from pressure groups and its political opponents. Organisations like OccupyGhana have jumped into the fray, arguing on behalf of the galamseyers, that it is “illegal” for the Government to order the burning, where they are found, of excavators and bulldozers seized at galamsey sites.

This reaction of the pressure groups is surprising. The immorality of galamsey aside, are they seriously suggesting that the elected Government of Ghana has no power to take action, for the public good, without being beholden to a judicial service that is known to be both slow and (maybe) a neutral entity that is unconcerned with what the Government considers to be “in the public interest”? Have they forgotten the “Anas/judges paradigm” (so to speak) whereby even armed robbery was allegedly “palmed over” by certain judges?

I would ask the lawyers making noise about the burning of the galamseyers' excavators to recall what they know of the principles of “jurisprudence”, and answer this hypothetical question: “Suppose the Government were to learn that terrorists were driving vehicles loaded with explosives, towards an electricity sub-station or a water-purifying plant (the destruction of which would dispossess a huge number of the populace of two of the necessities of life – water and electricity) – should the Government have to first go to court, to get an order, before it could command its armed forces to use whatever force was available, to preventthe possible attack on those public utility installations?”

Is it not a fact that even humans can become “collateral damage” during an unavoidable military operation meant to ensure public safety?

Frankly, the evidence on the ground surrounding galamsey – the political intrigues; the Ghanaian's intrepid cupidity; the collaboration of chiefs and other influential persons – demonstrates that if the Government does not pursue tough coercive action, but relies on what might be termed “legalities”, galamsey will continuer to (1) finish off what's left of our water-sources; (2) food farms will become increasingly inaccessible to farmers, and (3) that our forest reserves, which are so necessary for preventing our country from becoming a desert in the age of climate change, will also continue to be decimated.

Under these circumstances, it behoves every patriotic political party and every intellectually honest organisation, to rally behind the Government to end the life-threatening emergency that galamsey has become. It is to be hoped that the President, Nana Addo Dankwa Akufo-Addo, will not allow himself to be intimidated to resort to methods that will only ensure that the stable doors are bolted AFTER the horses have fled.

Our legal system, after all, is based on English law, which is based on Roman law, which is, itself, largely based on Greek law. At each stage, the migrated law was MODIFIED to take account of the peculiar circumstances of the country that was importing the laws.

There is no doubt that most of those laws were primarily aimed at providing justice to the populace concerned. But there was always a catch, which the Government could use for good or for ill. The British, for example, did not scruple to use laws to seize the lands of King Lobengula of Zimbabwe, after they had tricked him to put his mark on a law that was translated for him by a corrupt British priest, and which he believed was going to “protect” him and his people!

Nor did the property laws of England prevent the British, once again, from unilaterally and arbitrarily imposing the payment of “tributes” on Asante in the 19th century! In one instance, they imposed a “tribute of 50,.000 ounces of gold on Asante! Just imagine that! With gold now selling at nearly $2,000 per ounce that's worth US$100 million in today's money! And all the Asantes had done was to defend their territory against British incursion – the British who had coined the phrase, “An Englishman's homes is his castle!”

To use legal instruments imported from Britain to prevent us from protecting our sources of life, namely, our water-bodies and food-growing and cocoa farmlands, is, therefore, to exhibit utter obtuseness of mind, I am afraid. Those who want us to do that, will live and die in dishonour in the eyes of our succeeding generations, who will bear the consequences of our obsequiousness to imported legal niceties.

Parting shot: They should remember what Mark Anthony thought of those people who were formally addressed as “honourable men” in Rome, but whose hands were stained with the blood of Julius Caesar!

If a referendum were taken, I am sure most of our people would say that book knowledge, used to defend or promote the peculiar calamity known as galamsey, will not indicate wisdom. On the contrary, wisdom should help us to survive any peculiar situation(s) that confront us on earth. Indeed, to allow book knowledge to blind us to this fact, will lead us inexorably to – SELF-IMPOSED EXTINCTION, ON OUR OWN, GOD-GIVEN LAND!