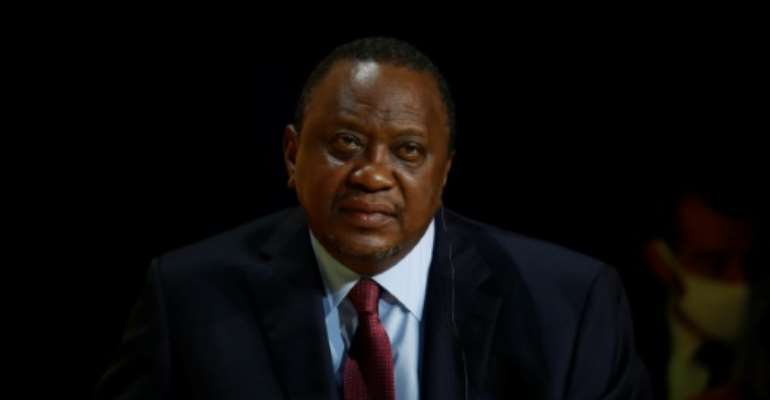 Uhuru Kenyatta said judges 'have tested our constitutional limits' by ruling against him. By GONZALO FUENTES (POOL/AFP/File)

Kenyan President Uhuru Kenyatta on Tuesday took aim at the judiciary after a recent ruling scuppered his plan to change the constitution ahead of next year's general elections.

In a speech celebrating Madaraka Day, marking the country's attainment of self-rule in 1963, Kenyatta singled out several court decisions that have put him at loggerheads with judges.

In 2017, the Supreme Court made a historic ruling cancelling his victory in a presidential election over widespread irregularities. He won a further term in a re-run which was boycotted by the opposition.

Then in May, a High Court ruled his reforms known as the Building Bridges Initiative (BBI) were illegal.

"From nullification of a presidential election in 2017 to an attempt to stop the will of the people as expressed through BBI, the judiciary has tested our constitutional limits, but not broken them," Kenyatta said in a televised speech.

"We must follow the rule of law and obey the decisions of the courts but the sovereign and supreme voice of the people of Kenya must also be followed."

Kenyatta was addressing a crowd in the lakeside city of Kisumu, an opposition stronghold, where hundreds of supporters gathered, many not wearing masks.

Kisumu has emerged as a new Covid-19 hotspot in Kenya in recent days, and was where the country first detected the Delta variant, first identified in India.

Kenyatta said that the nullification of his presidential win in 2017 had cost the East African country an estimated 1 trillion shillings ($9.3 billion, 7.5 billion euros).

"The field of independence has been expanded in the judiciary, and so the field of their responsibility should respond to the summons of nationhood," said Kenyatta, adding that court decisions "should be accompanied by a burden of choice."

The BBI reforms seek notably to expand the executive in what is billed as an attempt to curb election violence, blamed on the current winner-takes-all electoral system.

But critics see the move as a bid to create a prime minister post for Kenyatta, who is not allowed to seek a third term in 2022.

The BBI process seeks to have the president remain head of government and commander-in-chief, while ministers would answer to a prime minister.

The government has appealed the May 14 decision, in which the court ruled the reforms were illegal as the president does not have the right to initiate the process.

If adopted, the law would also lead to the creation of 70 new parliamentary constituencies and an official office of the opposition leader in parliament.

Some have argued that adopting the reforms would burden a country already struggling with debt with new sky-high bills -- and create more opportunities for patronage and corruption.