Algeria resumes international flights, but returning is still a struggle 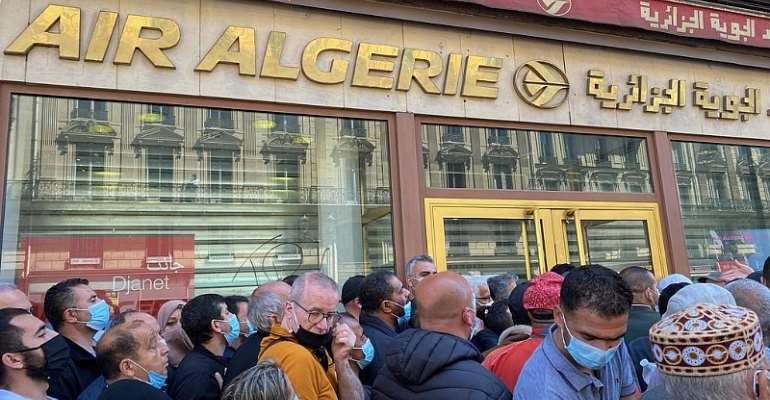 Algeria has partially reopened its air borders from 1 June for the first time in over 15 months of the Covid crisis. Many members of France's large Algerian diaspora are desperate to return home but, with only two flights each week, run by state-run Air Algérie, many are frustrated and angry.

For the diaspora in France that means just two flights a week on Tuesdays and Thursdays.

Air Algérie agencies in Paris and Marseille were swamped with customers on Monday, eager to get on the first available flight.

“I've been here since 5 am,” a man waiting in front of the office in Marseille on Monday told RFI, “some people have been waiting all night.”

“I want to go back to Algeria, my wife and children are there,” another man said. “I've been blocked here in France for 11 months, I just want to go home.”

There were similar levels of frustration and anger in Paris.

“After the government announced flights would resume, they knew that a lot of people would be coming, but they didn't even bring more staff,” said one man pointing to disabled people and women with children queuing up. “Our Algerian passport isn't worth anything, we can't even use it to return to our own country.”

Faced with the huge numbers and increasing tension, Air Algérie announced on social media that it was closing its Marseille and Paris offices because of “security concerns”.

In addition to difficulties in buying tickets, many found fault with the strict health measures Algerian authorities are applying to travelers.

Passengers must provide a negative PCR test for Covid-19 dated less than 36 hours before the date of travel, then quarantine for five days in a designated hotel at their own expense. Anyone testing positive for Covid-19 at the end of those five days, has to self-isolate for a further 5 days.

The resulting package is prohibitively expensive for some people.

“The ticket from Paris costs 598 euros. Then the quarantine costs between 270 euros and 300 euros, that makes close to 900 euros in total," a young Algerian told RFI in Marseille.

“There's no logic in having a negative PCR test and compulsory quarantine,” said another man among the angry crowd. “You can see the decisions are arbitrary. The authorities show no consideration for the people whatsoever.”

On Sunday, President Abdelmadjid Tebboune showed some flexibility, issuing an order that "students and low-income seniors be exempted" from paying the quarantine fees.

It was also decided to "lower the accommodation fees by 20 percent for Algerians returning to the country". The fees had been set at 41,000 dinars (250 euros).

The concessions come after several days of protests by members of the diaspora in front of consulates in Paris and other big cities in France.

Dissatisfaction remains, however, over the fact Air Algérie is offering just five services.

In a statement issued on Sunday, a collective of Algerians abroad reiterated its “rejection of the opening of only five services" and asked "to be able to buy airline tickets from other foreign companies and thus alleviate the pressure on Air Algérie".

Meanwhile several Algerian doctors have pointed out the merits of a progressive return to international travel. The country is way behind with its vaccination campaign and it's thanks to the drastic lockdown introduced at the beginning of the pandemic that Algeria's health situation is not worse.