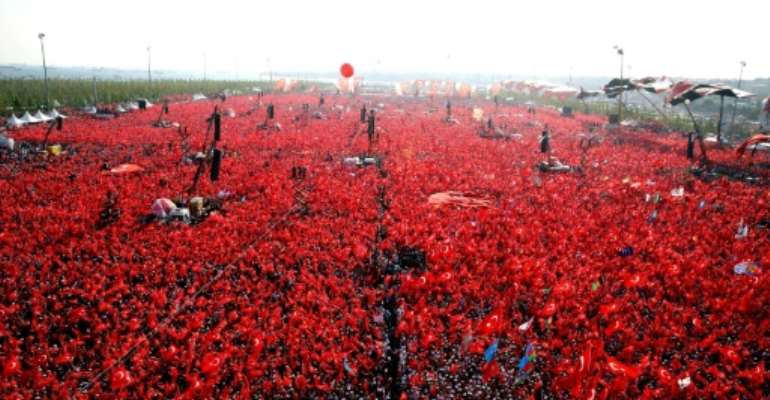 A rally after the failed coup. By STR (TURKEY'S PRESIDENTIAL PRESS SERVICE/AFP/File)

Turkish spies snatched a nephew of a longtime foe of President Recep Tayyip Erdogan in Kenya and brought him back to Turkey, media and family said on Monday.

Since 2016, Turkey has arrested tens of thousands of people suspected to have links to Gulen.

In a video posted on social media on May 20, Selahaddin's wife confirmed the couple lived in Kenya and that she had not heard from her husband, who taught at a school in Nairobi, since May 3.

Individuals and media linked to Gulen's movement said on social media that Selahaddin had been "kidnapped" in Kenya, as they launched a campaign calling for his release.

Selahaddin Gulen is accused of belonging to the "FETO terrorist organisation", the description used by Ankara for Fethullah Gulen's movement.

The preacher, who lives in Pennsylvania, insists he is the head of a peaceful network of charities and companies, and denies any links to the 2016 coup bid.

But Erdogan, who once was allied with Gulen, describes him now as the leader of a "terrorist" group which is seeking to infiltrate and overthrow his government.

A Kenyan court on May 6 banned Selahaddin Gulen's arrest and extradition to Turkey, according to legal documents seen by AFP.

The court also ordered the return of his passport and said he he should be allowed to return to the United States.

Selahaddin, for whom an Interpol red notice was issued at Turkey's request, arrived in Nairobi on October 17, 2020, and was arrested before he was freed on bail two days later.

AFP was unable to reach his lawyer Monday.

The PKK has waged an insurgency against Turkey since 1984 and is blacklisted by Ankara's Western allies.

Since the failed coup, Turkey has "repatriated" dozens of people accused of belonging to Gulen's network, regardless of the repercussions such actions may cause abroad.

The kidnapping of six Turkish nationals in Kosovo by MIT agents in 2018 sparked a political crisis in the Balkan country, leading to the sacking of its interior minister and intelligence chief.

Ankara has also put pressure on many countries, especially in the Balkans, Central Asia and Africa, to close schools linked to the "Gulenist" movement.

Kenya refused in 2016 to close six establishments despite Ankara's insistence.

The raids continue against alleged Gulen members, with almost daily police operations to arrest suspects across the country.

Since 2016, more than 140,000 public sector workers including teachers and judges have also been sacked or suspended over suspected Gulen ties.