New York based Ghanaian Bishop Honored by the City Of Brooklyn 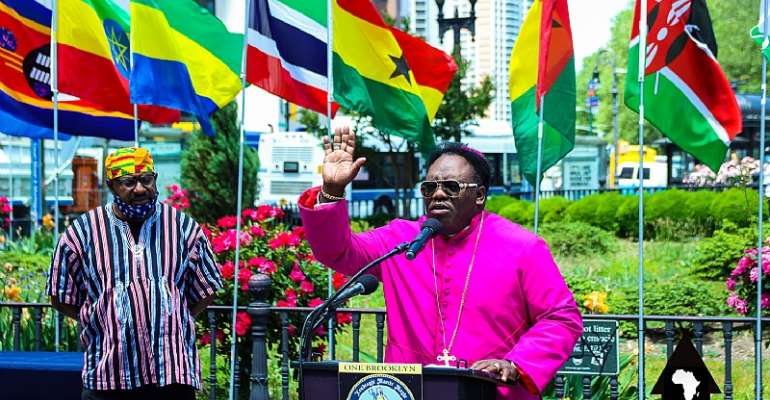 As Ghanaians continue to make an impact in the various communities they live in the diaspora the name of Ghana gains international acclaim. The international community in various countries joined in the activities of the year as Ghana celebrated its 64th post-independence milestone. One of such events happened in the Borough of Brooklyn in New York. The President of the Borough of Brooklyn Hon. Eric Adams hosted an event at which some Ghanaians who have made outstanding contributions to the African community were honored. This special event was facilitated by the Brooklyn Ambassador Mr. Jerry Kwabena Adinkra. One of the honorees was a renowned Cardiologist and Minister of God who has traveled extensively between Europe, Asia, the Caribbean and the United States touching lives physically and spiritually in the person of Bishop Dr. Akwasi Adu Amankwah.

Bishop Dr. Amankwah received a citation a paragraph of which read; "I salute Bishop Dr. Akwasi A. Amankwah, for practicing medicine since 1999 after completing his education in Russia, the United States of America and St. Lucia. I applaud him as a televangelist and radio host for many years, using the media platform to empower, equip and educate the people of the Kingdom of Christ; I commend him for spreading the word of God to over 25 countries while visiting; I recognize Dr. Amankwah has assisted in the training of many doctors to acquire knowledge and his experience of imparting and healing patients; I recognize he has contributed to the essence and fabric of our State and has contributed immensely to the diversity of the Borough of Brooklyn…..”

On the 25th of May, 2021 he was honored to lead the Africa Day Parade in Brooklyn as the presiding Bishop.

Bishop Akwasi Adu Amankwah was born in Kumasi, to Nana Osei Bonsu, the ex,- deputy General secretary of Savior church of Ghana and Madam Elizabeth Osei Bonsu the then Matron or Director of Nursing at the Okomfo Anokye hospital .

After completing High school at one of Ghana’s prestigious schools being Prempeh College, Bishop Dr. Amankwah was awarded a scholarship to pursue his education in the USSR.-Russia from 1990- 1994 at the Volgograd Medical Academy, school of Medicine, the 2nd best in the Russia Republic.

Whilst in Russia he started a televangislistic ministry which drew souls all over the country.

In 1997, He transferred from Russia to complete his medical education at the Spartan health Science University, School of Medicine in St Lucia and finally in the United States of America with the schools affiliation with Georgetown University and graduated in 1999.

He continued his Evangelist Gospel Televangelist, Radio work reaching out and winning souls for Christ.

He joined the Church of Pentecost whilst in the United States and was a member from 1995 till 2012 until he started his ministry but still affiliated to them.

Bishop Amankwah is now the Presiding Overseer of Revival and Sabbatical Evangelical Ministries located in Long Island, New York ; a body of believers from Pentecostals , Sabbaticals, Evangelicals and protestants origin. He is the Founder of Prayer Army of Christ Movement International which hosts a prayer line on Friday nights reaching as many as 11,000 people in 94 Countries, to praying together and seeking God via AMANSAN RADIO in New York and has impacted the Gospel in 40 states in USA through Tele, social and Radio mediums.

Bishop Amankwah has been an international Evangelist and a Radio host since 1992 and 2015 respectively. God through him has led people to the cross of Christ. He is simple, bold, committed, charismatic, and uncompromising man of God. He has been grated audience by Presidents of Guinea, Russia, Ukraine, Ghana, Benin and Royalties in Asanteman.

He is a man of Prayer with the demonstration of the works of the Holy Spirit through Miracles, Wonders and signs. In fact within the last 4 years till now several people with terminal illnesses have been healed through his ministry/ He gives glory to God.

He is a medical Doctor by training and prepares a lot of Doctors preparing for USMLE exams clinical skills at Goldsmillerriview in Houston and New York.

In 2014 He was elected as Bishop Elect by Archbishop John Daniel Praise ,Vice President of the National Pentecostal Council in Nigeria and Prelate Archbishop of ILCOM, NIGERIA, and confirmed by Presiding Prelate Bishop His Grace Paul Cockfield in the same year 2014

He is also a member of Kingdom Five Fold Covenant Fellowship, where he is one of the Directors of Evangelism for Europe and Asia. He now serves as Director of Evangelism in Kingdom Five Fold Covenant Fellowship (International Clergy Network, U.S.A) as well as Presiding Bishop and Founder of Revival and Sabbatical Evangelistic Outreach Ministry International. & Revival Prayer Army of Christ Movement International Inc. U.S.A , Minister of Savior church of Ghana, West Africa and Member of Global United Fellowship of Clergy’s International and a member of Global United fellowships of Bishops -USA, Bishop Akwasi Adu Amankwah ‘s call is to identify, empower ,educate, equip, build people with the Gift of Evangelism to the World to Save soul. His ministerial work takes him around the world.

He is married to Professor Jennifer Amankwah , a prophetess of God and blessed with two Children, Gideon 23 and Angelica 19.

Citation By Burough Of Brooklyn

Come donate body cameras to us, we want to buy more for poli...
21 minutes ago