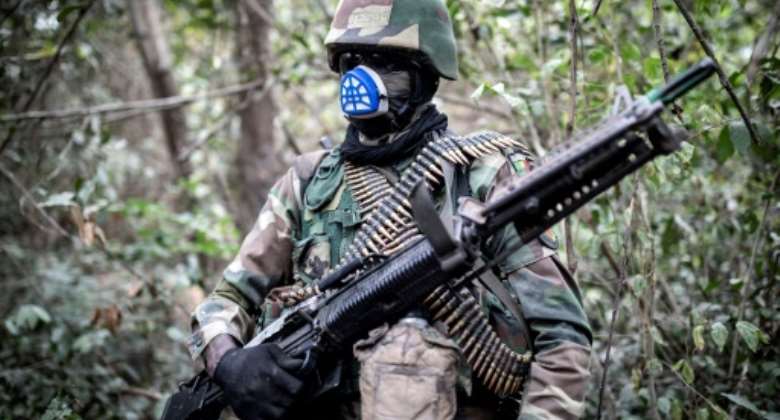 The Senegalese army's last offensive against Casamance separatists was in January. By JOHN WESSELS (AFP/File)

The Senegalese army launched a fresh operation against separatists in the southern region of Casamance early Sunday, a spokesman said.

"Operations are under way," the spokesman said in a message to AFP. "The goal is to create conditions for people to return home," he added, referring to civilians displaced by the decades-old conflict.

A village elder in Sao Domingos, some 20 kilometres (12 miles) away in neighbouring Guinea-Bissau, said he could hear explosions coming from south of the Casamance capital Ziguinchor.

"Around 3:00 am (0300 GMT) we heard very loud explosions quite near the Senegalese border," Quecuto Djaura told AFP, adding that they occurred at regular intervals for four hours.

Senegalese media said the army targeted positions of rebel leader Cesar Atoute Badiate, head of one of the factions of the separatist Casamance Movement of Democratic Forces (MFDC).

One of Africa's oldest ongoing conflicts, the fighting in Casamance has claimed thousands of lives since it first broke out in December 1982.

The region had returned to an uneasy calm in recent years until the army launched a major new offensive on January 26, capturing rebel bases in the Foret de Blaze area on the border with Guinea-Bissau.

Senegal's army says the latest operation is aimed at stopping alleged rebel exactions on civilians and helping displaced people return home, as well as cracking down on trafficking in timber and cannabis.

Casamance, home to 1.9 million people, was once among Portugal's colonies in West Africa, along with what is today Guinea-Bissau. But it is located within Senegal, a former French colony.

The region is almost separated from the rest of Senegal by The Gambia -- a remoteness that fed into perceptions of discrimination by the government in far-off Dakar and helped create an independence movement.

The conflict has rumbled on at a low level for several years, with occasional flare-ups.

In 2018, 14 young men were slaughtered in execution-style killings north of Ziguinchor.

The election of President Macky Sall in 2012 brought about several attempts at peace, all of which failed, partly because of divisions within the MFDC.

The two sides met in Cape Verde in April for the first talks to be publicly divulged since negotiations in Rome in 2017.

They issued a joint declaration defining "guidelines for negotiations" including "the solemn proclamation of the wish of both sides to resolve the Casamance conflict through dialogue".

MoMo transaction value for April declines by GH₵2.8billion
1 minute ago