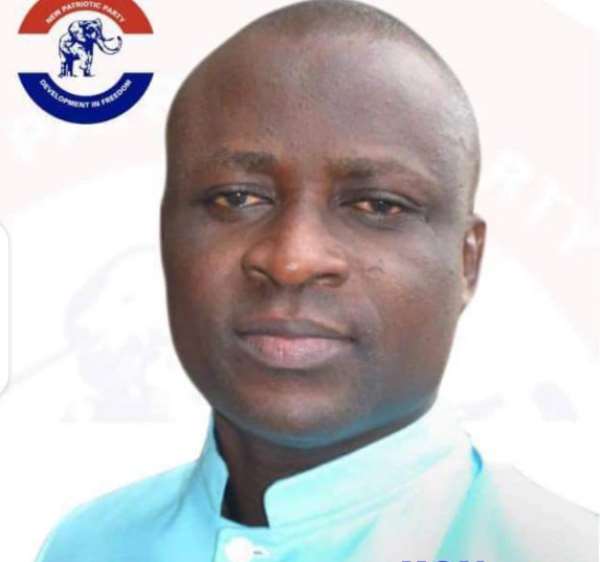 The immediate past New Patriotic Party Member of Parliament for Jomoro Constituency of the Western Region, Paul Essien has been accused of hoarding some 2020 campaign items.

According to the group, this caused him to lose the Parliamentary seat he won in 2016.

The Truth Patriots of NPP in Jomoro stated that Paul Essien can't blame Ernest Kofie, the current Jomoro MCE for his defeat.

The group also claimed Paul Essien awarded contracts to himself without thinking about the party members.

They added that Paul Essien sidelined most of the NPP guys who campaigned tirelessly for him in 2016.

Read below the full statement:

Ordinarily, we decided not to respond to this erroneous embedded "reasons why Hon Ernest Kofie must not be renominated" from the none existence Concerned NPP Members

However, we want to state categorically that, we know the source of all this falsehood and hatred. This is not the first and wouldn't be the last when you have people who for the sake of personal gains will go to every limit to destroy the very party that has given them shape.

Firstly, The so-called Concerned Members stated that, the Hon. MCE does not respect the party because he does not attend to invitations extended to him by coordinators and polling station executives.

This statement is a pure misrepresentation of facts from a desperate unrecognized group of persons.

We want to state that, the current state of the NPP in Jomoro is one, that no meetings are organized to even think of calling the Hon. MCE to attend.

The current crop of Executives has belittled the powers of our polling station Executives to the extent that they cannot organize meetings. Woe onto any executive that organizes a meeting at the polling station level. Some executives that tried it were seriously sidelined from all party activities creating lots of apathy.

Again, they also echoed that, the MCE, did not print a single T-shirt to support the just-ended election.

Respectfully, we still do not understand why the above-mentioned persons are limiting party support to the printing of T-shirts.

Are these individuals purporting that everybody who has benefited from the party printed T-shirts?

Notwithstanding the limitations, the Honorable MCE printed thousands of T-shirts for the party which was delivered to the party Chairman. All these efforts would not be mentioned because there have been earlier attempts to discredit everything that the MCE does.

Not satisfied with the above, they claimed that Hon MCE neglected the party people for NDC members and went ahead to do their biddings. What a fallacy? These are all attempts to soil his hard-earned reputation. How would a former Chairman who brought the party to power for the first time in a constituency be accused of such an evil act?

In fact, what will compel him to do this great disservice to the very party that gave him the power he holds.

Seriously, we want to put on record that, the Hon. MCE would never for any prevailing issues sell out the NPP party. Under his watch as the constituency Chairman, he fought the oppositions with all physical and intellectual battles and there could be no way to turn around to play the ostriches.

Factually the President, Nana Addo Dankwa Akufo Addo had 25,699 votes in the just ended 2020 elections as against 19,889 NPP Parliamentary votes.

This happened because of how well the MCE related with the party membership and the other general public and sold the good works of the NPP government to the populace.

The huge difference between the Presidential and Parliamentary votes confirms the arrogance portrayed by the Member of Parliament and the Constituency Chairman who would go every limit to sideline any party person that points out uncertainties in the party and their attitudes which were, directly and indirectly, affecting party work and participation of the grassroots.

Few weeks before the general elections, a section of the youth who were working directly with the youth wing of the party to canvas for votes was cautioned to cease their campaign. How would you win power when young abled men are warned not to campaign with no justifiable reasons? This act continued to the extent that the constituency youth organizer was sidelined in most party meetings and activities.

Furthermore, they emphasized that The Hon. MCE has a poor working relationship with Chiefs and Security personnel in the Municipality, etc.

Frankly, Hon Ernest Kofie is one among most respected as far as our Chiefs and Security personnel are concerned. He offers needed supports and assistance to all stakeholders and does not meddle in their activities.

His opinions are always applauded in all higher places because of his in-depth analysis and knowledge of issues and his work. He hasn't encountered any qualms with any person since he assumed the highest political office of the Municipality.

He happens to be Awulae's darling boy because of the respect he gives to the Paramountcy and continuous support to the Chiefs of Jomoro. How would a person who has not locked horns with any stakeholder be termed as not working on good terms with them? That is another laughable fallacy.

In addition to the above, they said that the MCE undermined the former member of Parliament.

This political jaundice reason is simply cloth with hatred. Simply put, the MCE never worked to undermined the MP instead he undermined the MCE for not even attending a single assembly meeting throughout his four years as MP.

This MP demonstrated through all seen actions that, he wouldn't support the MCE to succeed because, during the appointments in 2017, his favorite was not endorsed by the Hon. Assembly Members.

He has since that time hold a cold war against the MCE who tried to prove that he stands for the party and not his gains. On several occasions, he has tried to counter-cross the MCE in the execution of Assembly projects.

He paints a picture of competition between himself and the Hon. MCE.

Notwithstanding the above sidelining and competition, the Hon. MCE campaigned assiduously for the MP only that the populace had already taken their decision on the lots of dubious acts that were going on.

The Concerned NPP Members also opined that the MCE awarded contracts to himself and his cronies.

This indication is a figment of their imagination and it shows clearly that they are not privy to a lot of information.

Back in 2016, some party persons supported the party in various forms.

Just after that election in 2016, all these people were neglected and one who was given a project to undertake by the MP till today has not been paid after four years. A whopping amount of GHC250,000 has now been a debt on that person to bear.

The Hon MCE knowing all this took the opportunity to give these Party persons some contracts so they could offset their debt.

The MCE has not awarded any contract to himself or any person who is not a known party person and for that matter someone who did not support our course.

We, therefore, challenge the so call concerned NPP Members to produce any evidence to these unfounded allegations.

However, not less than 40 different projects have been awarded under the One Million per Constituency (in our case CODA) and all have been in the chest of the MP. We dare you to tell us who those contractors are?

On record, the Constituency Chairman and the MP awarded to themselves all these projects without a single party contractor given the least of it. How would these people turn around to instigate such an action?

The Concerned NPP Members also claimed that, throughout the period, the MCE has only supported the 2020 election with only GhC35000. Once again, they have exposed themselves.

How do you tell us that, the MCE does not support party activities at one point and turn round to admit that he supported the party with GhC35000 on the day before the election?

Why are they silent on how much the Chairman contributed during the election.

We need to know because he is also the Municipal NADMO coordinator and that position is also a political appointment like that of the MCE.

The Chairman had the position after we had won the 2016 election.

Is it not a fact that the MCE helped the party to secure GhC64000 that was used to purchase the head pans and the smoking nets that until recently, were never shared?

Are we all not aware that the MCE also helped to secure an amount of GhC22,000 that was used during the registration?

During the registration to the general elections, the MCE visited a lot of the registration centers to access the grounds and to greet, our party agents just to boost their enthusiasm for the work.

We want to state categorically that, there were streams of funds from various sources and individuals to support the just-ended election and much of this money was kept the same way party items were hoard.

Not satisfied with their greed at the expense of polling station executives, funds that were released by the National Executives to the Constituency Executives for the payment of polling agents, who sacrificed their time and energy in December 7 2020 also ended up in the pockets of some few executives.

Party Coordinators were not resourced and complaints were coming from all angles. Some funds were also given to the wrong hands and that created apathy for key position bearers in the party.

Also, past party executives who are known to be influential in their localities were sidelined in all party activities.

Seriously, with this attitude, how can an election be won?

We want to put on record that, the reasons for our failure to retain our seat in Jomoro are not far-fetched and no amount of blames on innocent individuals will wash.

It will serve the party well if we stop the further disintegrations and focus on party reorganization so to recapture political power.

Any attempts to fuel issues and course the appointment of any other person as MCE will further dent our fortunes as far as elections in Jomoro are concerned!

Finally, we entreat the good people of Jomoro not to be surprised about these happenings as they are part of the series of events underlined to be carried out just to discredit the MCE.

We, want to assure the NPP that, maintaining Hon. Ernest Kofie as MCE will help us to recapture political power come 2024 and the reverse will become another sad song to be sung.