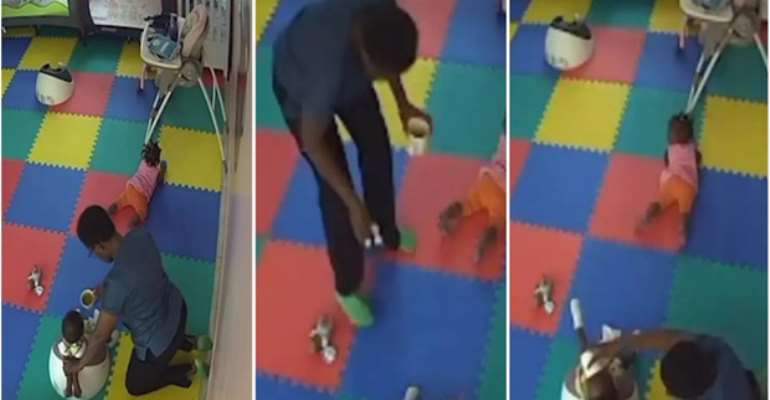 The death of an 11-month-old baby girl at an Accra crèche which story was broken yesterday is disturbing and scary because of the underlining circumstances.

Even before the Police conclude their investigations sufficient evidence provided by the CCTV in the room where the alleged crime was committed will go a long way in facilitating the process.

The father of the deceased must be congratulated even as we express our condolence to both parents, for questioning the circumstances underpinning the death of the baby girl who was not known to have fallen ill prior to her succumbing to death.

We should learn to pose questions and to take appropriate action when we are in doubt about certain developments.

The case of the five police officers who were arrested for extortion comes to mind. Had the victims not reported the case the culprits would have continued to fleece money from innocent persons.

We encourage others to take cue from such developments and to react appropriately when there are sufficient grounds for suspicions of bad conduct.

The death of innocent Allegra Yaba Ackah Mensah allegedly at the hands of suspect 54-year-old caregiver Clara Ayani-Ampah is a source of worry. We are compelled to question the quality of monitoring of care-giving facilities across the country by their managements and the relevant state regulators.

We have been here before. One of the orphanages in Accra was in the news some years ago when inappropriate practices were reported. Since then it would appear that the relevant authorities have not done much to protect babies in the care of the facilities.

Besides the standard police investigations which have of course, been commenced already we suggest that a probe is ordered into the case under review.

Forcing the porridge down the throat of the baby girl suggests that the kid could not breathe, asphyxiation, the outcome of which was death.

The caregiver was obviously angry because perhaps the kids had given her extra work or that her employers had delayed her salary. She could also have had a nasty night at home with her own family. These are factors which could have had a hand in her conduct.

If she is highly temperamental her employers should have determined this anomaly in her and kept her away from babies.

Managers of facilities such as crèches must create monitoring mechanisms to isolate unfit caregivers with a view to taking them off this important schedule of delivering care to babies.

We would also advise that such facilities as a matter of urgency, be fitted with CCTV cameras.

It is our hope that investigations would be swift to bring a closure to this painful chapter in the lives of the parents of the little girl.

I dare confused, boastful Shatta Wale for a battle at stadiu...
38 minutes ago