Macron in South Africa for talks on Covid vaccine 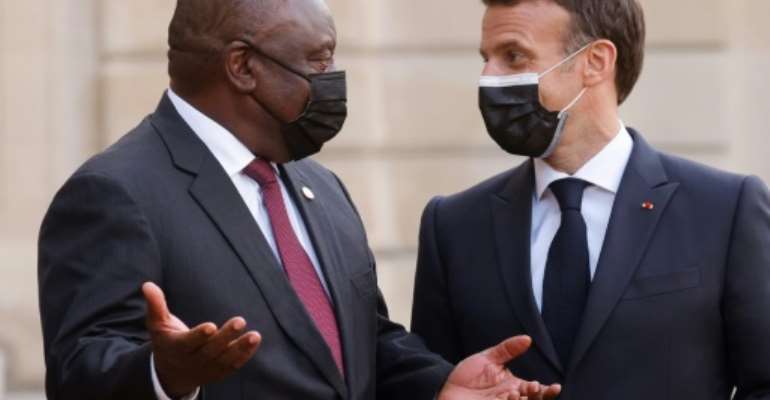 Macron arrived from a historic visit to Rwanda where he acknowledged French responsibility in the 1994 genocide.

Landing in Johannesburg, he headed for the capital Pretoria where he was to be welcomed by Cyril Ramaphosa at Union Buildings, the seat of government.

The pair will launch a programme at the University of Pretoria to support African vaccine production, a project backed by the European Union, United States and World Bank.

The idea is being pushed by South Africa and India, which say the waiver will spur vaccine production in developing countries.

Sub-Saharan Africa has lagged behind the rest of the world with vaccination -- less than two percent of its population has been immunised six months after the campaign started.

Ramaphosa this month sounded the alarm about what he called "vaccine apartheid" between rich countries and poor ones.

Pharma companies oppose the waiver, saying it could sap incentives for future research and development.

They also point out that manufacturing a vaccine requires know-how and technical resources -- something that cannot be acquired at the flip of a switch.

Macron's approach is to push for a transfer of technology to enable production sites in poorer countries.

The industry "is highly concentrated in the United States, Europe, Asia and a little bit in Latin America," a Macron aide said.

"Africa today produces very few anti-Covid productions, and most notably no vaccine at the present time."

South Africa is the continent's most industrialised economy but also its worst-hit by Covid.

The country has recorded more than 1.6 million cases of Africa's 4.7 million infections and accounts for more than 40 percent of its nearly 130,000 fatalities.

Jab: South Africa has struggled to ramp up its Covid vaccination campaign. By Michele Spatari (AFP)

But just one percent of its population of 59 million have been vaccinated -- most of them health workers and people aged 60 or above.

The immunisation effort got off to a stuttering start when South Africa purchased AstraZeneca vaccines earlier this year and then sold them to other African countries following fears that they would be less effective.

Then, after it started inoculating health workers, using Johnson & Johnson jabs, it had to pause for two weeks mid-April to vet risks over blood clots that had been reported in the US.

Macron's trip was scheduled to have taken place more than a year ago but was postponed as the pandemic shifted into higher gear.

His push for the visit stems from the fact that South Africa "is a major partner on the continent, a member of the G20, it's regularly invited to the G7 -- it's essential in the approach to multilateralism," one of his aides said before the trip.

Macron will also make a pitch for French business in South Africa, especially in climate-friendly sectors.

The two will also discuss the security crisis in northern Mozambique, where a bloody jihadist insurgency is now in its fourth year.

Before flying home on Saturday, Macron will talk to members of the French community and, like many VIPs before him, visit the Nelson Mandela Foundation.