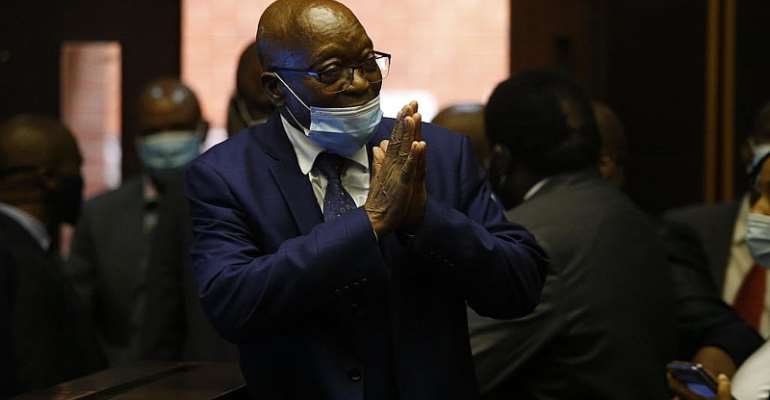 Disgraced former South African President Jacob Zuma has pleaded not guilty to all 16 charges of racketeering, money laundering, corruption and fraud he faces in a court case that had lasted 16 years. A representative of the French arms manufacturer Thales has also pleaded not guilty to charges that they bribed Zuma while he was Deputy President.

The case revolves around the 1998-1999 arms procurement deal made by the African National Congress government when Zuma was deputy president under Thabo Mbeki.

At the time, fighter jets, patrol boats and military gear were purchased from five European arms firms for 30 billion rand, then the equivalent of nearly 5 billion euros.

Zuma is accused of accepting bribes totalling four million rand from one of the firms, French defence giant Thales.

He was charged with corruption in 2005 but these charges were dropped before he became President in 2009. They were reinstated after he left the Presidency.

Standing in the dock at the Pietermartizburg High Court on Wednesday, Zuma answered: “Yes, I heard them. I plead not guilty to judge Piet Keon," who asked him if he understood the charges.

The case however has been adjourned until 19 July after the ex-leader's lawyers asked to have prosecution attorney Billy Downer recused, accusing him of bias.

Zuma's lawyer Thabani Masuku said Downer was politically motivated and did not show the independence and impartiality that would guarantee Zuma a fair trial.

Thales counsel Samantha Jackson said the French company had never paid any bribes to Zuma to allegedly prevent investigation into the arms sale.

Two so-called interventions made by Zuma, according to the prosecution in no-way benefitted Thales.

After leaving the court, Zuma  addressed his supporters from a specially-erected stage. Hundreds had gathered in a noisy demonstration of support outside the court.

He said there was "no turning back now" that he had recorded his plea.

The case was being pursued by "those who had long sought to destroy him politically," he said.

State has a watertight case
Sipho Ngwema, spokesman for the Directorate of Public Prosecutions says the fact that the matter has finally reached court is a huge milestone. The issues being raised by counsel for the defence are secondary to the corruption charges Zuma is facing.

Ngwema is convinced the state has a watertight case relying on credible witnesses.

Legal analysts say there is a very slim chance that Judge Koen will rule in Zuma's favour on his plea to remove Downer.

They argue that the "case within a case" involves unchartered territory.

Removing a prosecutor is more problematic that having a judge recuse himself or herself, while the former presents evidence in a confrontational process.

The latter, who makes judgement is required to be more impartial and open-minded.

Should Zuma's plea fail it is unlikely he could delay proceeding by appealing the ruling.

Zuma resigned as president in 2018 after the ruling ANC party threatened to remove him from office.

His successor, Cyril Ramaphosa, has vowed to tackle corruption, admitting it was a major problem in the previous government.