In Mozambique, an imam's struggle to help jihadist victims 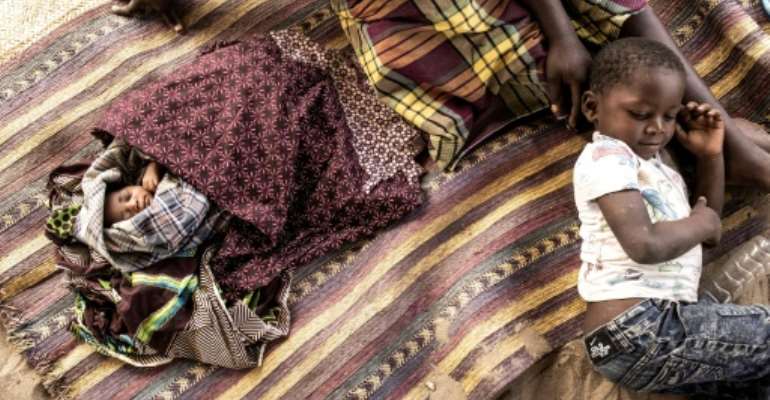 Julia Francisco, centre, sits with her four-day-old baby, left, at a makeshift shelter for displaced people. By JOHN WESSELS (AFP)

Imam Sufo Mussa is on the front line of Mozambique's jihadist insurgency.

Each day he struggles with the victims of anguish and despair. For him, divine help and military intervention are the way to end the suffering.

Mussa is witnessing first-hand the toll on people who have lost loved ones, who have abandoned their homes and see no future.

"We are crying a lot," the imam told AFP, describing the crushing impact on people from an insurgency now in its fourth year.

Mussa currently hosts 30 displaced people, living in shacks erected behind the Aldjadida mosque in the port of Pemba.

Imam Sufo Mussa, at his mosque in the Paquitequete neighbourhood of Pemba. By JOHN WESSELS (AFP)

"They arrive here very desperate... full of tension," he said inside a madrasa room at the modest white-and-blue mosque.

Outdoors on the sandy grounds, little boys run around the yard, playing.

They are children displaced by the fighting.

"These ones came from Palma," Mussa said, pointing at two boys aged under six, cleanly dressed in matching gold-and-black shirts and trousers.

The militants brazenly attacked the town in March, prompting thousands of its panic-stricken residents to flee.

Many people here are bewildered at the seemingly sluggish efforts to end the violence.

"We can't live like this," said the 61-year-old imam, wearing a brown robe and cream embroidered cap.

"Is there someone who will listen to us?" he asked.

"To those who hear us, can you feel it in your heart, and find it in your head, that we are also people created by God?" Mussa pleaded, his hands gesturing in desperation.

He made a passionate call for national and external military intervention to thwart the violence.

If the violence is not quickly tackled, there "won't be Cabo Delgado" province left and the insurgency risks spilling into neighbouring countries, he warned.

"Zambia, South Africa, Malawi, Kenya, Zimbabwe -- why are those African countries not helping us?" he asks.

"Because when (the insurgency) leaves here it will go into Zimbabwe, go into South Africa. We are neighbours, they must join together to help us," he said.

The imam also called for help from Europe and African Union.

"Until we are helped, we are like a hospital without medicine."

Leaders of the regional bloc, the Southern African Development Community (SADC), are this week expected to meet to discuss the possibility of deploying 3,000 troops to battle the insurgents.

US Special Operations Forces early this month ended a two-month training exercise in tactical skills for Mozambican marines and a second exercise is slated to kick off in July, according to the American embassy in Maputo.

Mussa said that religious leaders raised the alarm with the authorities when they started noticing men "entering the mosque with shoes... with knives in their cassocks, and then we said that these are not from Islam".

But their warnings were dismissed, added Mussa, who is also a delegate of the Islamic community of Cabo Delgado.

Today, the insurgents are roaming the region, wreaking havoc in mainly coastal chunks of northern Mozambique, including Mocimboa da Praia, where they launched their first attack in October 2017 when they sprung raided three police stations.

A key port town, Mocimboa has become the jihadists' base since it was seized from the government last August.

In December, President Filipe Nyusi said his government had been aware of Islamic radicalisation in Cabo Delgado five years before jihadists launched their campaign.

She even wears knickers to wash in the compound — Takoradi w...
12 minutes ago